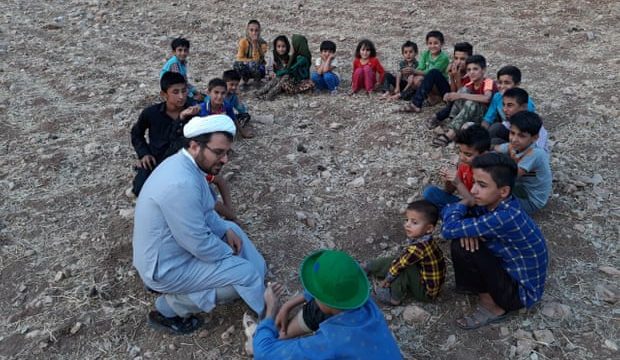 The Guardian | Saeed Kamali Dehghan: It was almost winter and Bear was getting sleepy,” the Iranian cleric reads aloud. He has taken off his clerical robe, put aside his white turban and is trying to entertain a group of children in one of Iran’s poorest villages.

In between phrases, he troops back and forth to make sure everyone is listening. “Are you with me?” he asks. “What did Bear want to do?” The children, who are painting their school walls, reply: “Bear had a story to tell.”

It’s all in a day’s work for Esmail Azarinejad, a father of two who is not your average cleric. Iranian theocrats are better known for delivering inflammatory remarks at Friday prayers or fulminating on television against a backdrop of “Death to America” chants.

Azarinejad, 39, sees his mission somewhat differently. When he’s not teaching Islamic philosophy or Arabic literature at his city’s seminary, he travels to villages in the impoverished south-west of Iran, distributing books from the boot of his old Peugeot and reading passages from books such as Bear Has a Story to Tell by the American author Philip C Stead.