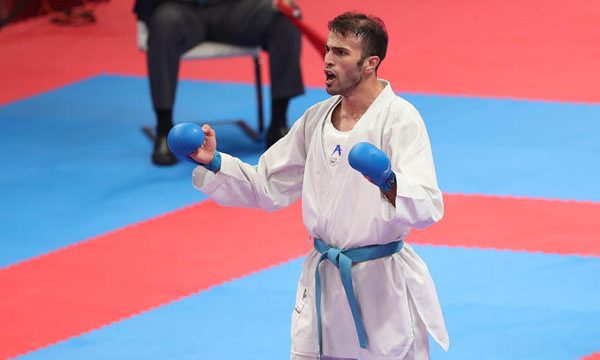 On Monday, Iran’s Bahman Asgari defeated Saudi Arabia’s Raef Adel alturkistani 5-0 in the finals fixture of Men’s -75kg karate contests, and grabbed the gold medal of the karate contest. Asgari’s gold was Iran’s second gold in the 2018 Asian Games karate contests, the first having been collected by Sajad Ganjzadeh on Sunday.

Asgari advanced to the finals after three decisive victories against rivals from Afghanistan, Mongolia and Thailand. He tied the match against Chinese Taipei opponent in the semi-finals, but was declared winner by juries’ vote and was qualified for the final bout.

Speaking to MNA correspondent after the Monday’s victory, Asgari said his match against the Saudi opponent could have been a real challenge as Saudi Arabia had made a lot of progress in the field for years and they were after the gold medal.

“I made a lot of efforts to win gold and didn’t even take much of a breather during four years worth of training. I dedicate the medal to the Iranian people, and as of now I’m aiming for world contests,” he said.

Collecting a total of 15 gold, 14 silver and 13 bronze medals, Iran is currently ranked 4th in the medals table, after China, Japan and South Korea.

The 18th edition of Asian Games officially started on August 18 in Indonesian cities of Jakarta and Palembang and will warp up on September 2.