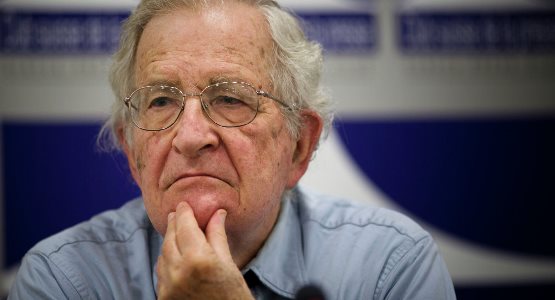 Alwaght – Prominent American linguist, philosopher, and social critic Avram Noam Chomsky says hatred towards Iran is “a deep-seated part of modern American culture,” because of nation’s move towards independence in 1979.

Professor Chomsky in an interview with Truthout.org discussed the American obsession with Iran, and said, “the hatred of Iran is such a deep-seated part of modern American culture. To eradicate it is going to be very hard.”

Rejecting the American leaders claims that their animus towards Iran stems from the Iranian government’s “repression inside,” arguing, “the most repressive countries in the Middle East are the ones we support. By comparison to Saudi Arabia, Iran looks like Norway, you know. As far as violence in the Middle East is concerned, the Saudi Arabian [and] UAE actions in Yemen, which we’re supporting, are much worse than anything.”

Asked who does he explains the virulent hatred for Iran among American leaders, Professor Chomsky answered “It’s very simple: in 1979 Iran moved towards independence. And worse than that, they overthrew the US-imposed tyrant who had been ruling the country and US interests. They’re not going to forget that. In fact, immediately right after the Iranian revolution, the US began supporting the Iraqi invasion of Iran, which was devastating. Iraq was using chemical weapons, was killing hundreds of thousands of people, it was supported all the way through. In fact, at the very end it won the war for Iraq by closing the Persian Gulf to Iran.”

Chomsky remarks echoed his October 2017 interview to Tom Dispatch website that he said “Iran has long been regarded by US leaders, and by US media commentary, as extraordinarily dangerous, perhaps the most dangerous country on the planet,” because the Islamic Republic supports resistance movements, such as Lebanese Hezbollah and Palestinian Hamas, and is interested in nuclear technology.

Explaining American Leaders’, Including Trump’s, stance on Iran the veteran expert said, “In the doctrinal system, Iran is a dual menace: it is the leading supporter of terrorism, and its nuclear programs pose an existential threat to Israel, if not the whole world. It is so dangerous that Obama had to install an advanced air defense system near the Russian border to protect Europe from Iranian nuclear weapons — which don’t exist, and which, in any case, Iranian leaders would use only if possessed by a desire to be instantly incinerated in return.”

Chomsky, however, denounced the US doctrinal system saying that “In the real world, Iranian support for terrorism translates to support for Hezbollah, whose major crime is that it is the sole deterrent to yet another destructive Israeli invasion of Lebanon, and for Hamas, which won a free election in the Gaza Strip — a crime that instantly elicited harsh sanctions and led the US government to prepare a military coup.”