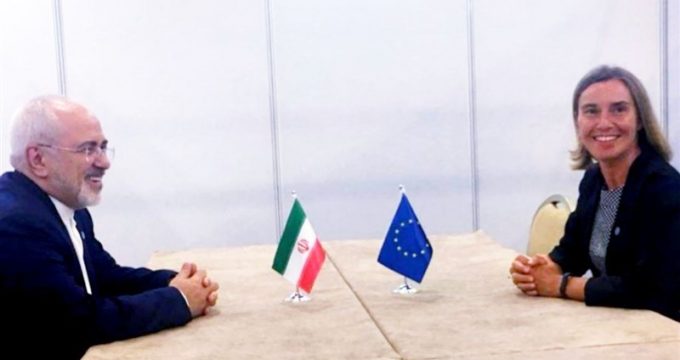 Iranian Foreign Minister Mohammad Javad Zarif said that he saw no point in a meeting between Iranian President Hassan Rouhani and his US counterpart Donald Trump after the latter’s decision to leave the Iranian nuclear deal.

Ayatollah Khamenei’s message to the Pilgrims of Hajj 2018

In the Name of God, the Most Beneficent, the Most Merciful.

Thousands of Iranians along with pilgrims from other countries held on Monday the Disavowal of Pagans ceremony in Arafat Desert, 20 km southeast of holy city of Mecca in west of Saudi Arabia.

In a Monday statement, Islamic Revolutionary Guard Corps (IRGC) strongly condemned some of the slogans and banners of Feyziyeh School protests and denied any involvement in the event.

Eid Al-Adha opportunity for Muslims to unite in face of divisive plots: Zarif

Iranian Foreign Minister Mohammad Javad Zarif said at a time that enemies are seeking to divide Muslims, Eid al-Adha (the Feast of Sacrifice) is a great opportunity for Muslims around the world to unite and “come together”.

Russia: No talks with US over Iran’s exit from Syria

Russian Presidential Spokesman Dmitry Peskov said on Tuesday that his country has had no talks with the US over Ira’s withdrawal from Syria.

A detained British-Iranian aid worker sentenced to five years in jail in Iran has been released from detention for three days, her supporters and Iran’s envoy to Britain said on Thursday, in a move welcomed by Britain’s foreign minister.

United Nations Special Envoy Staffan de Mistura has invited Iran, Russia and Turkey to talks due to be held in Geneva next month on forming Syria’s Constitutional Committee, a UN spokeswoman says.

ICJ to hear Iran’s case against US sanctions

The International Court of Justice (ICJ) will soon begin hearing Iran’s legal challenge against renewed sanctions by the United States.

Iranian President Hassan Rouhani and his cabinet members Saturday renewed allegiance with late Imam Khomeini, the founder of the Islamic Republic of Iran.

The European Union agreed 18 million euros ($20.6 mln) in aid for Iran on Thursday, including for the private sector, to help offset the impact of U.S. sanctions and salvage a 2015 deal that saw Tehran limit its nuclear ambitions.

Siemens turns its back on Iran

German engineering conglomerate Siemens has announced it’s drastically scaling back its business operations in Iran. It’s yet another German company to cave in after the United States reimposed sanctions on Tehran.

Iranian Energy Minister Reza Ardakanian said the country has resumed its negotiations with Russia on the construction of a new nuclear power plant with a capacity to produce 3,000 megawatts (MW) of electricity.

Millions of Muslims celebrated the Eid al-Adha in Mecca on Tuesday during the annual Hajj pilgrimage.

All foreign forces staying in Syria without invitation must leave, says Lavrov

All foreign forces staying in Syria without an invitation from Damascus must leave the country, Russian Foreign Minister Sergey Lavrov said on Wednesday in comments on a statement by US National Security Adviser John Bolton.

About 190 Palestinian demonstrators have been injured in clashes with Israeli troopers during a large protest rally in the besieged Gaza Strip near the border line with the Israeli-occupied Palestinian territories.

Washington is set to announce that it will no longer recognize millions of Palestinian refugees’ “right of return” to the Israel occupied territories, Israeli media reports.

Facebook and Twitter say they have suspended or removed accounts linked to Iran and Russia over “inauthentic” or “manipulating” behaviour.

Iranians have won gold medals in both men’s and women’s kabaddi championships at the Jakarta Palembang 2018 Asian Games in Indonesia.

A magnitude 5.9 quake hit Iranian western province of Kermanshah at early on Sunday and according to the governor general of the province so far 232 cases of injury and two dead has been reported.