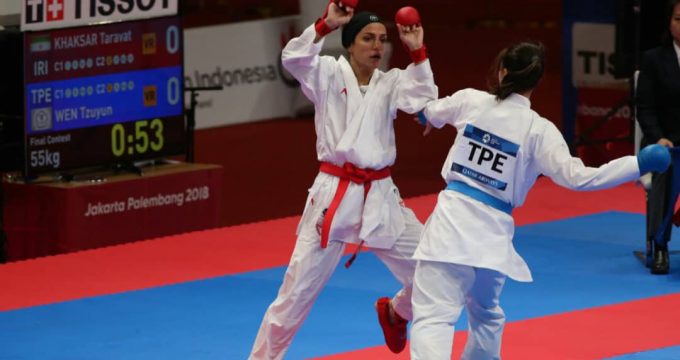 IRNA – Iranian female karate fighter Taravat Khaksar in the weight category of -55kg received a silver medal at 2018 Asian Games which is underway in Jakarta.

After being defeated by her Taipei rival, Khaksar ranked second and snatched a silver medal.

She had earlier hit Afghanistan, Indonesia, and China to reach the final match.

The Iranian outfit at the 2018 Asian Games comprises 280 sportsmen and 98 sportswomen who will compete in 42 sports fields.

The 2018 Asian Games kicked off on August 18 and will wrap up on September 2 in the Indonesian cities of Jakarta and Palembang.

Over 11,000 athletes from 45 Asian countries attended the competition.

The 2018 Asian Games, officially known as the 18th Asian Games and also known as Jakarta Palembang 2018, is a pan-Asian multi-sport event underway in the Indonesian cities of Jakarta and Palembang.