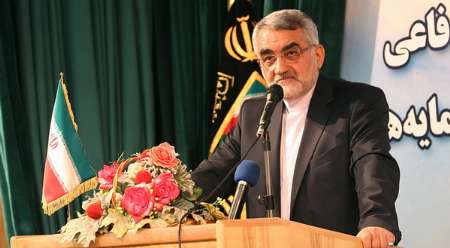 Boroujerdi: UN failed to do its duty to settle Syrian crisis

MNA – Senior parliamentary official Alaeddin Boroujerdi says the United Nations has failed to do its duty to settle the seven-year long crisis imposed on the Syrian nation.

A member of Iran’s Parliament National Security and Foreign Policy Commission Alaeddin Boroujerdi made the remarks on Saturday in response to some news about the UN extending an invitation to Iran for talks on Syria’s Constitution.

“My assumption is that the UN special envoy for Syria is trying to mount an already saddled horse and tout [the UN role] in drafting the Syria Constitution, because the role of the three guarantor states – Iran, Russia and Turkey – in easing the Syrian crisis and settling the country’s problems is undeniable,” said Boroujerdi.

He went on to add, “the United Nations has practically failed to do its duty to settle the seven-year long crisis imposed on the Syrian nation.”

The UN has also failed to play a positive role about the civil military conflicts and the displaced people of the Syrian war, he added.

“Cooperation between Iran, Russia and Turkey has had the most impact on solving Syria’s problems,” said Boroujerdi adding “ultimately, it is up to the Syrian nation to decide the fate of their own country, and the Constitution will be formed by the vote of the Syrian people.”