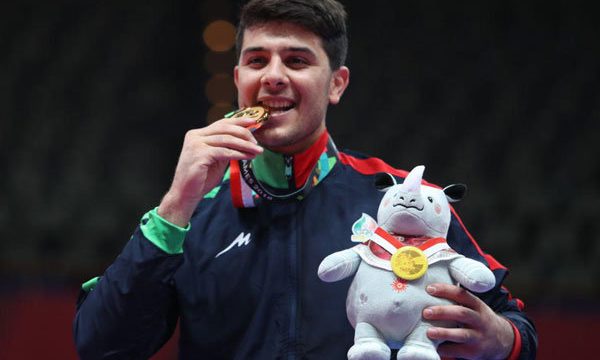 On Tuesday, Iranian taekwondo practitioner Saeid Rajabi fought Dmitriy Shokin from Uzbekistan in the final match of heavy weight taekwondo competitions at +80kg division as part of the 2018 Asian Games in Indonesia. The two fighters were equal 1-1 at the end of the first two rounds but Rajabi came out victorious 2-1 in the nick of time.

The Iranian athlete had defeated Kazakh Ruslan Zhaparov 11-7 to reach the final showdown, after having defeated a Korean practitioner in his first match and a Chinese fighter to enter the semifinal stage.

With his medal, Iran has so far bagged 4 gold, 3 silver and 3 bronze medals in the 2018 Asian Games which is currently underway in Indonesia.

The event will wrap up on 2 September. Iran is participating with 378 athletes.