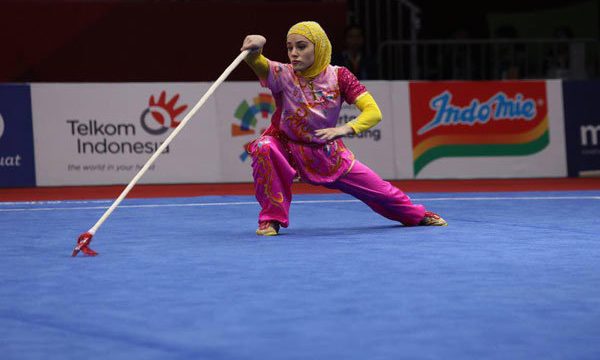 18-year-old Kiani snatched the silver medal of Women’s Jianshu and Qiangshu at 2018 Asian Games, underway in Indonesia. She became the first Iranian woman who wins a medal in Taolu categories of Asian Games.

She gained the score of 9.70 in Jianshu on Sunday and 9.71 in Qiangshu on Tuesday. Obtaining the total score of 19.41 he stood second in the final ranking.

“This medal is a start for future achievements,” she said after receiving the silver medal, adding, “the Chinese rival was so good and snatched the gold. I’m happy that I could rank above world-class practitioners from Japan, Chinese Taipei, Hong Kong, Vietnam and Malaysia.”

“I was first involved in gymnastics, as I really enjoyed the whole spectacle of the sport, but once I saw wushu and the discipline of taolu I quickly changed sport. It’s not about medals or championships for me. Even if I never entered competitions again I will still love the sport as it’s a constant learning curve for me,” the official website of the competitions quotes her as saying as part of her biography.

2018 Asian Games officially kicked off on August 18 in Indonesian cities of Jakarta and Palembang and ends on September 2.