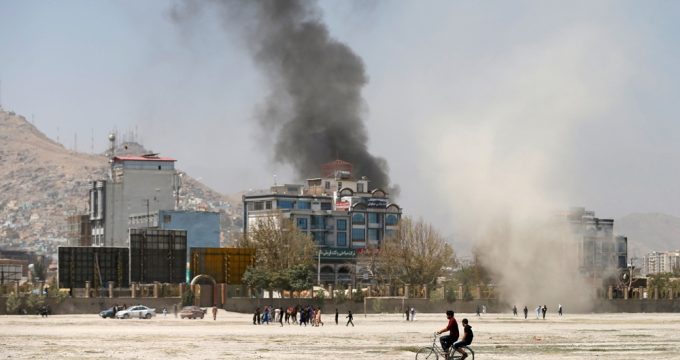 The Taliban has fired several of rockets at the presidential palace in Kabul as the Afghan president was delivering his holiday message for the Muslim celebrations of Eid al-Adha, police said.

The attack on Tuesday prompting a ferocious aerial response with helicopter gunships bombing the home from where the rockets were reportedly launched.

The first rocket landed somewhere near the presidency building while the second hit near a NATO compound and the US Embassy but no one was hurt, said police official Jan Agha.

The boom of the rockets was heard in the live broadcast of President Ashraf Ghani’s speech. As he also heard the thud, Ghani interrupted his message to say: “If they are thinking the rocket attack will keep Afghans down, they are wrong.”

The Kabul area where the rockets hit is one of the most fortified in the Afghan capital, where embassies and government buildings are surrounded by high cement blast walls and coils of razor wire.

Many streets near the US Embassy are closed off, as well as those near sensitive government and military locations.

Kabul police spokesman Hashmat Stanekzia said Afghan police had noticed a suspicious vehicle earlier on Tuesday morning and followed it to a mud-brick home near the sprawling Eid Gah mosque where hundreds had gathered to offer their prayers for the Eid al-Adha holiday. 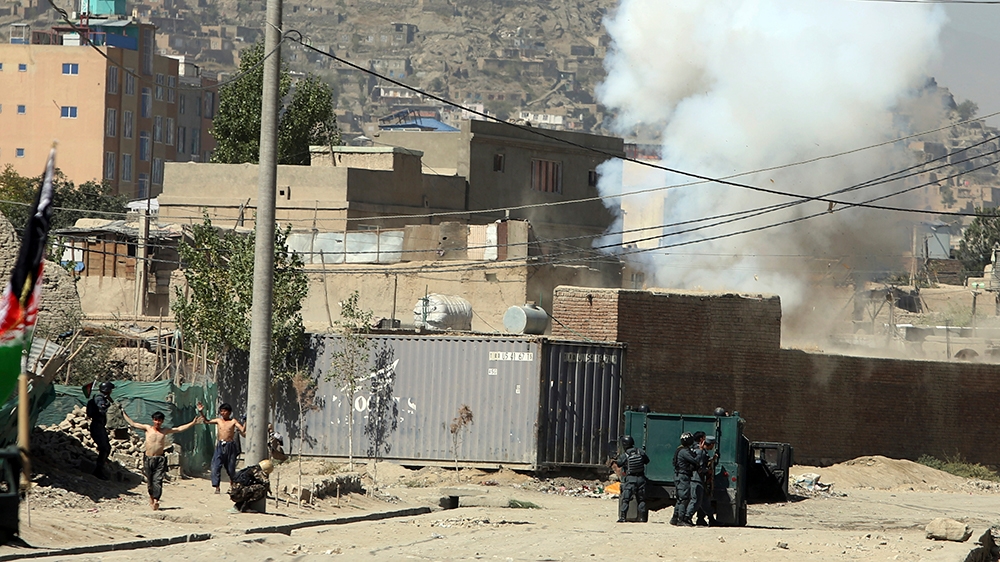 Once inside the house, the suspects are believed to have fired the rockets, Stanekzia told The Associated Press news agency. A helicopter gunship was called in and bombed the location, destroying the house and the vehicle.

Eyewitnesses said that after the explosions, sporadic shooting could be heard from the area, though it wasn’t clear who was firing. The witnesses spoke on condition of anonymity fearing for their safety.

Another police official, Mohammed Akram, said four attackers were apparently involved though it was unclear if any survived the helicopter assault on the home. Police were combing the area in the heart of Kabul, where crowded open-air markets intrude on old residential areas of mostly poor, mud-brick homes.

There was no immediate statement from the Taliban, or a claim of responsibility for the attack by any other group, but the assault on the major Muslim holiday sent a stark message.

It was also another blow to Ghani’s efforts to bring the group to the negotiation table and hold peace talks to end the country’s 17-year war.

Shafiq Hamdam, a former NATO adviser, said the attack was a “disaster” for the peace efforts.

“The Taliban have managed to come into the capital, targeting the Green Zone after the government has offered this three-month ceasefire, so other than a big “no” to the ceasefire, this shows the willingness of the Taliban to continue fighting and to keep up with killing civilians and targeting these cities,” he told Al Jazeera.

On Sunday, Ghani had offered a conditional ceasefire to last during the holiday, saying it would only take effect if the Taliban reciprocated.

The Taliban have been at war with the US-backed Afghan government for nearly 17 years, and have stepped up attacks in recent months, seizing rural districts and carrying out major assaults against security forces and government compounds on an almost daily basis.

On Monday, Afghan forces rescued about 160 people, including women and children, just hours after the Taliban ambushed a convoy of buses and abducted them in northern Kunduz province.

The quick response marked a rare if limited battlefield success for the troops after weeks of unrelenting attacks.

“More than 160 civilians have reached home safely but at least 20 soldiers and policemen have been taken to an undisclosed location by the Taliban,” Ghulam Rabani Rabani, a provincial council member in Kunduz, told Reuters news agency.

Ghani announced the ceasefire during a televised Independence Day address, saying security forces would observe the truce only if Taliban fighters reciprocated. It was the latest attempt by Ghani to find a solution to the country’s 17-year war.

“I don’t see at the moment a sign for immediate reconciliation or continuation of the ceasefire,” Hamdam said.

In June, the Taliban observed a government ceasefireover the three-day Eid al-Fitr festival, leading to unprecedented scenes of government soldiers and Taliban fighters embracing on front lines, and raising hopes for talks.

But one of the Taliban commanders said the June ceasefire had helped US forces, who the Taliban are trying to drive out of the country.

Taliban leader Mullah Haibatullah Akhunzada rejected the new offer on the grounds that it too would only help the American-led mission.

The Taliban have launched a wave of attacks in recent weeks, including storming the city of Ghazni, where more than 200 people were killed in the fighting.

Blasts, suicide attacks and clashed between the Taliban and Afghan forces killed more than 1,600 civilians in the first six months of the year, the highest number in the past decade, despite June’s truce, the United Nations said in a statement on Sunday.

Afghan security forces have struggled to battle the Taliban and the Islamic State of Iraq and the Levant (also known as ISIL or ISIS) since the US and NATO formally concluded their combat mission in the country in 2014 and shifted their focus to a “support and counterterrorism” role.