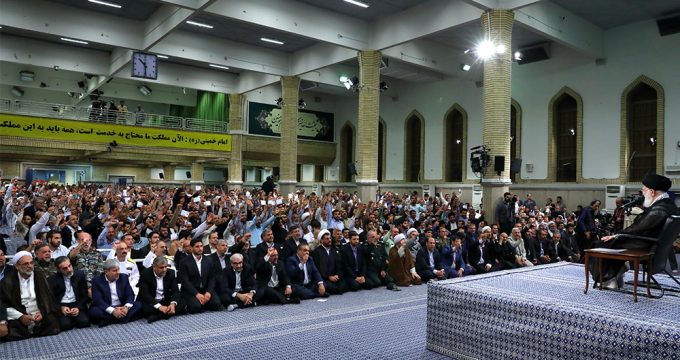 Iranian authorities have arrested 67 people in a drive against financial crime, the judiciary said on Sunday, as the country faces renewed U.S. sanctions and a public outcry against profiteering and corruption.

US owes Iran over $110 billion in compensation: VP

The Iranian vice-president for legal affairs says the US must pay Iran over $110 billion dollar as unpaid compensation to Iranian victims of hostile US moves.

An Iranian military team finished third in a contest using armored personnel carriers in the International Army Games in Russia.

Ayat. Khamenei: No negotiations with cheating, bullying US

Leader of the Islamic Revolution Ayatollah Seyyed Ali Khamenei says the Islamic Republic will not enter into new negotiations with the United States due to cheating and bullying nature of its government.

Iranian and Iraqi border guard officials inked an agreement to further bolster their cooperation in fighting terrorist groups and exchange of intelligence.

Hezbollah downplays US sanctions on Iran

The leader of Lebanon’s militant Hezbollah movement said Tuesday that U.S. sanctions against Iran and his Iran-backed group will not have major effects on them and will not lead to regime change in Tehran.

The spokesman for Iran mission to UN Alireza Miryousefi on Tuesday rejected the United Nations’ report on Al-Qaida in northeastern Syria.

Iranian President Hassan Rouhani asserted that the Islamic Republic has received special privileges based on the Convention on Caspian Sea legal status.

FM: 20 pc of Caspian Sea resources should belong to Iran

Foreign Minister Mohammad Javad Zarif says Iran believes that it should own 20 percent of the Caspian Sea resources and the issue of an 11-percent share originates from an illusory line related to the former regime of Iran.

Iranian Foreign Minister Mohammad-Javad Zarif is to be present at the National Security and Foreign Policy of Majlis (Iranian Parliament) on Monday to detail the Convention of Caspian Sea legal status and Kazakhstan summit of the Caspian littoral countries.

The US State Department has formed an “Iran Action Group” to coordinate and run an aggressive US policy toward the Islamic Republic on the eve of the 65th anniversary of a previous American action against Iran – the CIA-led 1953 coup against the democratically elected government of Mohammad Mosaddegh.

Russia, China say they will keep their commitment to Iran nuclear deal

Russia and China have reiterated that they will continue their commitment to the 2015 Iran nuclear deal, known as the Joint Comprehensive Plan of Action (JCPOA), and will maintain their cooperation and relations with Iran in the face of new US sanctions.

The new Bell 206 helicopter simulator which has been updated by Iranian Army Air Force was unveiled on Saturday.

Today marks the 1953 coup d’état in Iran. 65 years have passed since that date. Among Iranians it is known as the 28 Mordad coup d’état.

Iran’s defense minister says the country will continue to focus efforts on developing missile capabilities and will next week unveil a new fighter jet on the National Defense Industry Day on August 22.

Israeli military says the regime has recently conducted war games using several divisions, including the infantry regiments, tanks and combat engineering units, in a move, which is apparently aimed at preparation for another war with the Lebanese resistance movement Hezbollah 12 years after the Israel’s defeat in the 33-day military onslaught against Lebanon.

US, Israel too weak to wage new wars: Nasrallah

Secretary General of the Lebanese Hezbollah resistance movement, Sayyed Hassan Nasrallah, says the US and Israel are too weak to a wage new war like their previous wars.

Turks break iPhones into pieces in response to Erdogan’s call

A number of Turkish citizens have broken their iPhones into pieces in response to a call by President Recep Tayyip Erdogan to boycott US electronics amid escalating tensions between Ankara and Washington.

The bomb used by the Saudi-led coalition in a devastating attack on a school bus in Yemen was sold as part of a US State Department-sanctioned arms deal with Saudi Arabia, munitions experts told CNN.

Turkish President Recep Tayyip Erdogan says his country will not “surrender” to the United States under the sanctions imposed by the US over the detention of an American pastor, accusing Washington of launching an “attempted economic coup” against Ankara.

Iran Prosecutor-General Mohammad Jaffar Montazeri has said that the judiciary will intensify tackling corruption, adding that if need be, top officials such as cabinet ministers will be brought to justice.

South Korea’s imports of Iranian crude dropped 43.5 percent in July from a year earlier, with buying fading amid looming U.S. sanctions against supply from the Middle Eastern nation.

The latest five ATR turboprop aircraft entered service on Friday starting on busy domestic routes such as Tehran to Mashhad.

Iranian First Vice President Es’haq Jahangiri says the country is facing sensitive economic conditions at the current juncture, but all problems can be successfully solved through “national unity and coherence.”

‘Chovgan’ registered as Iran’s cultural heritage, not any other country

President of the Polo Federation Hojatollah Dehkhodaei said Chovgan, a forerunner of Polo, was named in the 12th session of the Intergovernmental Committee for the Safeguarding of the Intangible Cultural Heritage as Iran’s cultural heritage, contrary to the claims of some other countries, like Azerbaijan.

Ezzatollah Entezami, one of the most prominent actors of the Iranian cinema and theater, has passed away at the age of 94.

Iran has replaced Australia as Asia’s top team in the latest FIFA ranking released on Thursday following the teams’ performance in the 2018 World Cup.