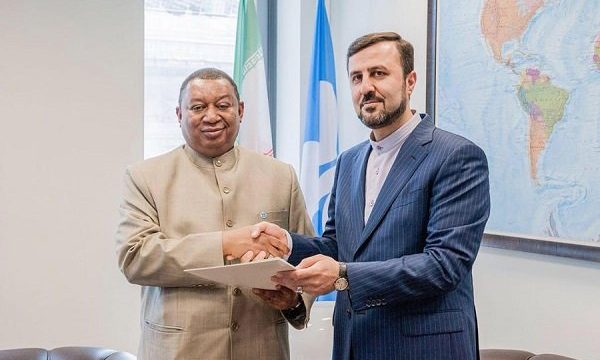 Some countries after politicizing OPEC: envoy

MNA – Iran’s permanent envoy to Vienna-based intl. organizations said that some countries misuse OPEC to further their own political aims.

Kazem Gharibabadi made the remarks in a Sunday meeting with Mohammed Sanusi Barkindo, Secretary General of OPEC, in Vienna.

Highlighting the need to maintain OPEC’s independence, the Iranian envoy said that it should not let few countries to misuse the organization to pursue their political aims.

No country can take the share of other member states’ oil production and export, he said, adding that the ministerial summit hasn’t granted such permission.

Islamic Republic of Iran believes that OPEC should strongly support its members and stop the plots and actions of countries seeking to politicize the organization, he added.

Barkindo, for his part, said that ensuring the independence of OPEC has vital importance and the organization should always remain nonpolitical.

Touching upon close ties with Iran and Iranian Oil Minister, he said that Iran is one of the founders of OPEC and it has always played a central role in decisions adopted by the organization.