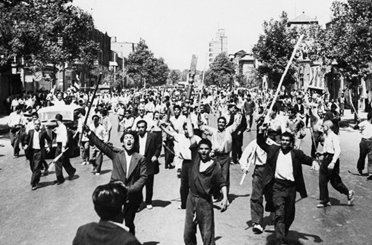 MNA – Today marks the 1953 coup d’état in Iran. 65 years have passed since that date. Among Iranians it is known as the 28 Mordad coup d’état.

On the day, the streets of Tehran became the scene of violence and chaos by hooligans in support of Mohammad Reza Pahlavi. The violence was engineered by Britain and with the help of US dollars. Finally, the democratically-elected government of Mohammad Mosaddeq was toppled.

The British, who saw unity among different groups of society as the main hurdle to their plundering of Iran, tried to create division among religionists and nationalists on the date the nationalization of oil was declared. They did so in order to create the ground for the return of Phalavi to power on August 19, 1953.

The coup was the highlight of suppression and despotism and the plundering of national resources until the victory of the Islamic Revolution in February 1979. There are many stories about the role of Britain and the US in the coup.

However, Kermit Roosevelt, the chief of the CIA’s Near East and Africa division who was director of the coup, said in an interview that it was the first secret operation against a foreign government which had been engineered at the end of the Truman administration.

These revelations show that due to political, geopolitical and economic reasons, foreigners have always had a covetous eye on Iran and that such moves have not been limited to the post-1979 revolution. Needless to say that regardless of who has been in power in Washington or London, the US and Britain have not yet abandoned their evil intentions toward Iranians, a nation that many experts say has civilizational superiority.

These moves show that the leaders of liberal democracy, from Dwight D. Eisenhower to Donald Trump, have been fearful of Iran no matter the nationalists have been ruling this country or proponents of Islamic republicanism.