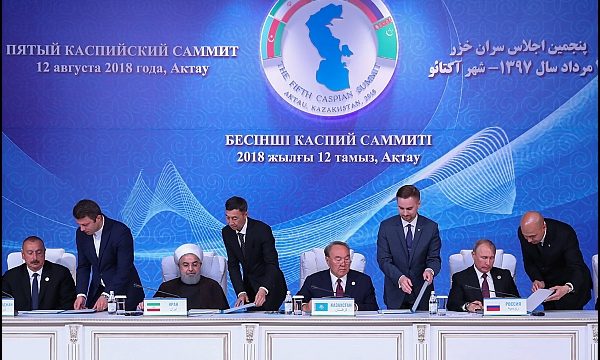 FM: 20 pc of Caspian Sea resources should belong to Iran

IRNA – Foreign Minister Mohammad Javad Zarif says Iran believes that it should own 20 percent of the Caspian Sea resources and the issue of an 11-percent share originates from an illusory line related to the former regime of Iran.

The Islamic Republic of Iran has never accepted such an illusory line, Zarif said in a TV program, adding that the idea that Iran should possess 50 percent of the Caspian Sea is wrong because in that case Turkmenistan and Azerbaijan would have no share.

Unfortunately, at the time of the former regime of Iran, due to its dependence on foreigners the ex-Soviet Union never allowed Iran to take even a step across the so-called Asta line and Iran did not get even a drop of oil, Zarif said.

‘What happened after the establishment of the Islamic Republic is that we did not allow Iran’s share to be decreased. The illusory 11-percent line is no longer valid. Of course some tried to revive this illusory historical procedure which had been forcibly imposed on Iran during the former regime but the Islamic Republic rejected it,’ the foreign minister said.

He said the Convention on the Legal Status of the Caspian Sea does not allow the littoral states to use the waters for military purposes against other countries, expressing surprise that some friends were bringing such matters of national pride under question.

‘There are kilometers of pipelines in the Caspian Sea which date back to the era of the former Soviet Union and no one used to consult us in this regard. But this does not bring them any right,’ Zarif said.

The foreign minister made it clear ‘Demarcation of the sea has not been done yet and Iran’s territorial integrity has been preserved in the Convention. Preparations have been made for future negotiations.’

On the latest developments concerning the Joint Comprehensive Plan of Action (JCPOA), Zarif said the Europeans have acted well concerning their commitment to the deal and they are now standing up to their ally.

The world has come to a conclusion that an individual based on his own personal interest cannot decide on behalf of others and this can be seen in the behaviors of Europe, Turkey, China and Russia.