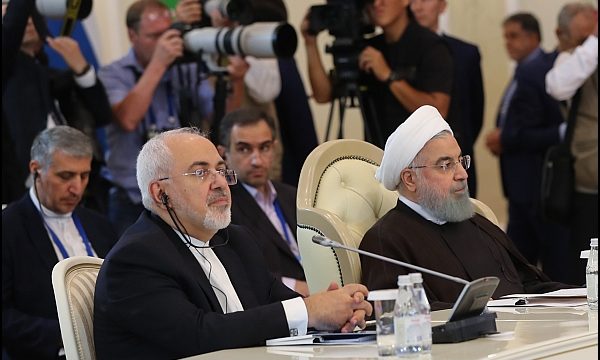 Tasnim – Iranian Foreign Minister Mohammad Javad Zarif dismissed claims that Tehran has ceded a significant part of its territorial rights to the Caspian Sea in a recent treaty it signed with four other littoral states, saying that Tehran has not retreated from its stance on the issue.

Speaking to the Persian-language news website Alef, Zarif vehemently rejected claims that in the Convention on the Legal Status of the Caspian Sea, which was recently signed in Kazakhstan, Iran’s share of the sea has reduced from 50 percent to 11 percent.

The top diplomat said such figures are not correct, adding that no shares of the sea have been determined yet other than for Russia and Kazakhstan.

Zarif further emphasized that the Iranian administration has not retreated (from its stance) or relinquished its rights to the Caspian Sea.

The remarks came after some Western media outlets claimed that in the recent treaty, Iran has easily abandoned its share of the Caspian Sea after the dissolution of the Soviet Union in 1991.

Iran, along with Azerbaijan, Kazakhstan, Russia and Turkmenistan, signed the Convention on the Legal Status of the Caspian Sea on Sunday in the port city of Aktau, Kazakhstan.

The convention was aimed at resolving a dispute over the status of the Caspian Sea which dates back several decades, following the collapse of the Soviet Union. Prior to that, Moscow and Tehran had signed a series of treaties, the last two of which defined the Caspian as a “Soviet and Iranian sea” but without establishing any maritime boundaries.