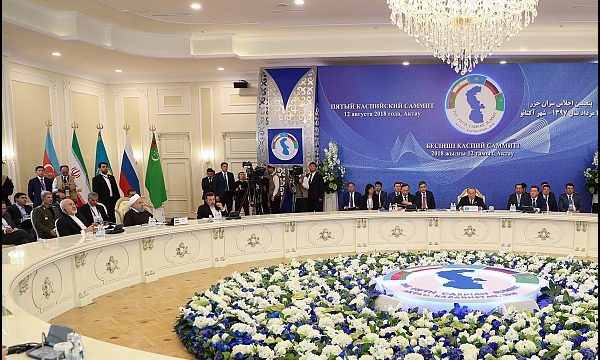 Iranian Diplomacy | Mahdokht Pazoki: Officials are sanguine about the outcome of the Caspian Sea summit going on in Kazakhstan; the five countries bordering the sea will agree to choose consensus as the basis of their decisions on their shared issues.

For many people, the first thing conjured up when speaking about the Caspian Sea may not be its splendid sandy beaches or Caviar delicacy; rather, it is the dispute that has lasted for more than two decades among five littoral states. The differences rose not long after the collapse of the Soviet Union in 1991 and the emergence of three newly independent countries—Azerbaijan, Kazakhstan and Turkmenistan. With the three republics added to Iran and Russia already bordering the Caspian Sea, the legal regime of the water became the hottest issue of the Caspian region.

The summit underway in Kazakhstan’ Aktau is convened with the aim of resolving differences on various issues related to the sea. Reports of media and comments made by sources close to the meetings indicate the five neighboring countries have come up with common grounds. Any new development will not be related only to the direct beneficiaries; rather any news coming out of the negotiation hall has audiences all across the world.

The importance of the Caspian Sea lies partly in its natural resources. Although the Caspian Sea is rich in mineral resources, such as uranium and copper, what makes the sea more strategic to the entire world is its hydrocarbon reserves. According to estimates, it has 48 billion barrels of proven oil reserves, while natural gas reserves are estimated at 8.76 trillion cubic meters; figures that are believed by some experts to be comparable to those of Qatar and Saudi Arabia.

Since energy has long been considered as a vital element of states’ security, the Caspian Sea region becomes prominent to the global security equation. Gas and oil are the main sources of energy supply to the entire world. Due to the intertwined status of energy and economy, having access to energy means a guarantee for political power too.

In addition to the need for energy, major powers, particularly the Western ones, benefit from investing in oil and gas projects. So is the case in most of the Caspian littoral countries that are planning to develop their untapped oil and gas fields, but lack the financial and technological capacities.

The importance of the region is not confined to its natural sources. The Caspian Sea is considered as a bridge linking two continents and one important region, namely Asia, Europe and the Middle East, to each other. China as the first energy consumer to the east, and Europe as the biggest costumer of Russian natural gas, are connected to each other through the sea. The strategic geopolitics of the Caspian Sea is further boosted by Iran which has been the focal point of US foreign policies. Iran is also an important interface between the Caspian region and India through the Gulf of Oman and Arabian Sea. Two major corridors being under construction in the east and west of the Caspian Sea, as well as the Trans-Caspian pipeline projects add weight to the transit role of the Sea and will benefit from reaching an agreement.

Agreeing on a convention on legal regime of the Caspian Sea would be a long-awaited achievement for the region. The consensus, if not rescinded, would come at the time the world is witnessing the unilateralist foreign policy of the US President Donald Trump. “Sanctions addicted” was the title Iran’s Foreign Minister Mohammad-Javad Zarif gave to the American President who has imposed different sets of sanctions on a number of countries, including Iran, Russia, and Turkey. He has also waged a trade war with China and has taken strict trade measures on the European Union, its main ally. Therefore, the Caspian convention would be a blow to his attempts to isolate states for their defiance in face of the US demands.

The convention and what President Trump has chosen as his platform toward global issues will be at the extreme ends of a spectrum. Withdrawing from the international nuclear deal with Iran in May and re-imposing sanctions on the country are not the only instances of President Trump’s unilateralist approach. Since taking office in 2017, the US president has withdrawn from several international agreements and bodies, including UNESCO and Paris Agreement.

* Mahdokht Pazoki is a member of IRNA English News Desk