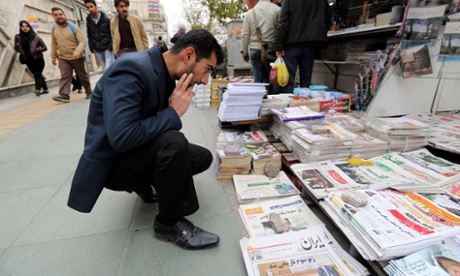 Iran’s government steps in to address paper crisis, but papers over the cracks

Bourse and Bazaar | Maziar Motamedi: Among currency fluctuations and returning sanctions, Iran is now battling a paper crisis. Gradual price hikes have been increasing pressure on book and newspaper publishers over the last year, but the scale of the crisis became clear when Culture Minister Abbas Salehi announced on August 4 that the country has just enough newsprint paper in storage to meet two months worth of demand. In response to the shortage, some newspapers have been forced to cease publishing, while others, including the popular reformist newspaper Shargh, have put up a pay wall.

The government has rolled out a support package that includes importing paper as an essential good. This will most likely calm agitated publishers in the short-term, but will prolong a vicious cycle and defer the real reform needed to address a decades-long problem of corruption and inefficiency. The paper crisis represents something bigger.

Mahmoud Sadri, a veteran journalist who currently heads the publishing department of Donya-e-Eqtesad, Iran’s foremost business daily, sees the paper crisis as just the latest manifestation of “Iran’s economic inefficiency.” Speaking to Bourse & Bazaar, Sadri explained, “We have no phenomenon called a paper crisis as a separate and standalone phenomenon. It’s not accurate to just say paper is in crisis since many goods are in crisis.”

In Sadri’s view, the paper crisis has its roots in the time of the 1979 Islamic Revolution, during which the government took on the mission to foster cultural production and provided for all the paper and raw material needs of the publishing industry. In order to do that, the Iranian government has typically opted for one of two options: they have either purchased the paper and offered it at cheap subsidized rates or offered handouts directly to private importers.

This misguided approach created conditions ripe for rent-seeking and corruption. Importers sought to abuse the cheap money they were being provided instead of creating actual in-demand value.

Such rent seeking accelerated in recent months, as the Iranian rial came under increased pressure due to returning US sanctions. “A group of profiteers and rent-seekers have entered the market and are making things much harder for paper consumers,” Abolfazl Roghani Golpaygani, president of the Iran Paper and Paperboard Syndicate said in a recent interview.

But the government seems intent to maintain the longstanding subsidies. On August 6, the Ministry of Industry announced that paper used for publishing had been added to the limited list of essential commodities that will be imported using the preferential government exchange rate of IRR 42,000 to the dollar. That rate is to remain unchanged until at least March 2019 as President Hassan Rouhani promised recently. Furthermore, the ministry agreed to immediately import 20,000 tons of paper to address the shortage.

Many journalists and publishers, like Sadri, are critical of this arrangement. They believe that the government should not use taxpayer money for handouts to publishers who often publish content simply to maintain their license, or who wish to publish content in accordance with their own political and economic leanings. There are growing calls for for a free market approach to publishing  in order to encourage competition that will boost newspaper quality and balance prices.

“How and based on what logic has paper been considered an essential good under the current circumstances?” asked Saeed Laylaz, a prominent journalist and pundit in a recent interview. He also referred to the decision as “explicit theft.”

However, cutting the flow of government support will mean that hundreds of book, newspaper, and magazine publishers will fold, with the potential for thousands of job losses at a time when high unemployment is a major challenge for the Rouhani administration. It should come as no surprise that the administration is unwilling to take a leap and reform the paper subsidies, despite Rouhani’s longstanding intention to reduce subsidies across the economy.

“The other issue is that the majority don’t accept that government paper subsidies are wrong in essence,” Sadri adds. In this way, Iran’s government is failing to address the long-term problem by dealing with the current paper crisis as a short-term phenomenon.

But while change to the government policy may not be imminent, Sadri does believe it is inevitable. “Even if no prospects of change are foreseeable at the moment, it will happen either way,” he said, pointing out that many countries have undergone similar processes of reform that on many occasions took decades to realize. In publishing, as with other parts of Iran’s economy, reform remains a waiting game.