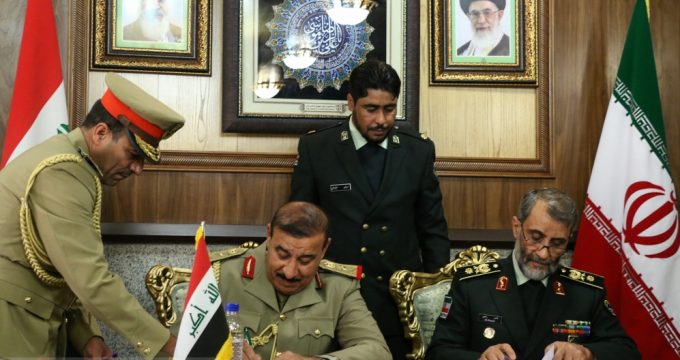 FNA – Iranian and Iraqi border guard officials inked an agreement to further bolster their cooperation in fighting terrorist groups and exchange of intelligence.

The agreement was signed in Tehran on Tuesday by Commander of the Iranian Border Guards Brigadier General Qassem Rezayee and his Iraqi counterpart Major General Hamid Abdullah Ibrahim al-Hosseini at the 7th joint meeting on Iran-Iraq shared borders.

The 1,609-km shared borders of Iran and Iraq render inevitable the joint specialized meetings between the border guards of the two countries, General Rezayee said.

He added that a big plot, known as the ISIL, was fabricated against the region, particularly against Iraq, by the global arrogance.

“The enemies’ plot was foiled, by the grace of God, and so the American-Israeli Takfiri sedition failed,” the Iranian commander added.

He stressed that the achievement made the joint cooperation and border security promotion more important than the past.

In the Tuesday meeting, the implementation of some articles in the previous agreements were emphasized, the General said, adding that intelligence cooperation, fighting terrorist and smugglers, as well as illegal movements along border areas, among other things, are included in the agreement signed by the two sides.

In relevant remarks on Sunday, Commander of Iran’s Law Enforcement Police Brigadier General Hossein Ashtari blasted the recent moves by a number of terrorist groups at the common borders with Iraq, and underlined the need for bolstering security cooperation between the two countries.

“Given the presence of certain terrorist groups in some of the bordering points to foment insecurity in these regions, expansion of cooperation between the security forces of both countries is inevitable and we should decrease these crimes through more cooperation,” General Ashtari said in a meeting with General al-Hosseini in Tehran.

He, meantime, said currently security prevails at the joint borders of Iran and Iraq and the terrorists’ moves have reduced.

General Ashtari also warned that the Iranian and Iraqi nations have common enemies, including the US and Israel, and stressed that the two states should try to foil the enemies’ plots.

He also underscored willingness of Iran’s Law Enforcement Police to cooperate with Iraq in training security forces and exchanging experiences.