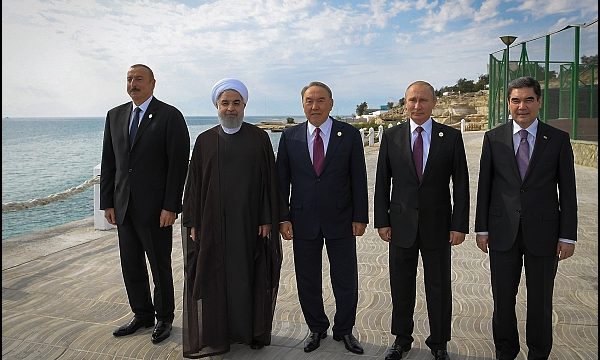 MNA – The heads of the five Caspian Sea littoral states released some sturgeon babies in the Caspian Sea as a sign of friendship and solidarity.

Iranian President Hassan Rouhani, along with presidents of Russia, Azerbaijan, Kazakhstan and Turkmenistan, released sturgeon babies in Caspian Sea as a sign of friendship and solidarity between the littoral states of the basin.

The symbolic ceremony was held along coast of the sea in Kazakhstan northwestern city of Aktau, where they walked along the beach and posed for memorial photographs.

The first meeting of the Caspian states’ leaders was held in Ashgabat in 2002, and the other summits were convened in Tehran, Baku and Astrakhan.

The Caspian Sea is the largest inland body of water in the world and accounts for 40 to 44 percent of the total lacustrine waters of the world. The coastlines of the Caspian are shared by Azerbaijan, Iran, Kazakhstan, Russia, and Turkmenistan.

The question of determining the legal status of the Caspian Sea have gained relevance after the collapse of the USSR, when the emergence of new subjects of international law — Azerbaijan, Kazakhstan and Turkmenistan — raised the question of the delimitation of the Caspian between the five countries. The difficulty of determining the status of the Caspian sea are related, in particular, with the recognition of its lake or sea, the delimitation of which is governed by different provisions of international law.

Kazakhstan’s Aktau, the venue for this year’s summit, is a city with a population of 180,000, whose residents greatly depend on the production and processing of Caspian resources.