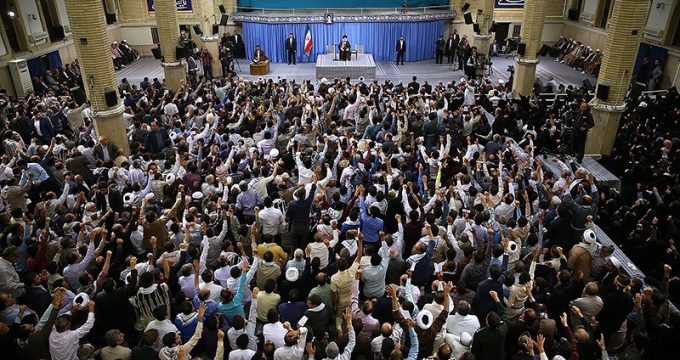 Ayat. Khamenei: No negotiations with cheating, bullying US

Leader of the Islamic Revolution Ayatollah Seyyed Ali Khamenei says the Islamic Republic will not enter into new negotiations with the United States due to cheating and bullying nature of its government.

President Hassan Rouhani said on Sunday that the will of the Islamic Republic of Iran is based on establishing closer and more friendly ties with the Republic of Azerbaijan.

Mismanagement, not sanctions, main cause of Iranian currency devaluation: Leader

Leader of Iran’s Islamic Revolution Ayatollah Seyyed Ali Khamenei has blamed the government for the ongoing economic crisis in the country, saying the internal factor has been much more effective than external ones like sanctions.

Iranian President Hassan Rouhani told the media that the signed Convention on the legal status of the Caspian Sea will be signed into law after being approved by the Iranian Parliament.

Iran’s Armed Forces are self-sufficient in all fields of defense and can offer their capabilities to other friendly countries, said the commander of the Ground Force of the Iranian Army on Monday.

Iran will not rein in its influence in the Middle East despite mounting U.S. pressure on Tehran to curb its regional activities, Foreign Minister Mohammad Javad Zarif told Qatar’s al Jazeera TV.

Iran is selling oil and gas at a discount to Asian customers as it prepares for the return of US sanctions, state news agency IRNA reported on Monday.

China to buy Iran oil regardless of US sanctions

As the biggest trade partner of Iran, China has long been importing Iranian oil, and will keep doing so despite US unilateral sanctions on Iran, the head of the international office of China Petroleum and Chemical Industry Federation (CPCIF) told the Islamic Republic News Agency (IRNA) on Monday.