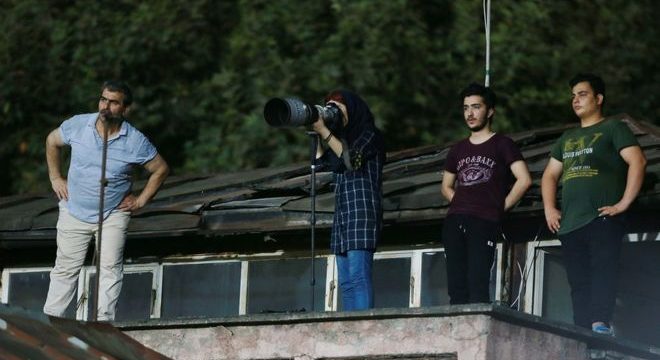 BBC – An Iranian photographer has caught the world’s attention after she defied restrictions that prevent women from covering men’s sporting events.

Parisa Pourtaherian, 26, was unable to enter the Vatani Stadium in northern Iran to cover a top-flight football match last month.

But she was undeterred and covered the game from a nearby rooftop using a long camera lens.

Images of her on the roof have been widely shared on social media.

Although there’s no official ban on women going to sporting events in Iran, it is rare for them to attend as they are often refused entry.

Many people have praised Ms Pourtaherian’s determination to cover this match despite the restrictions. Here, in her own words, she tells her story to the BBC.

Parisa Pourtaherian: I arrived at the match three hours early and all my focus was on a finding a way to take photographs. I looked for a nearby building that I could use, but I couldn’t find one anywhere.

I knocked on doors one after another, but I was determined not to get upset when I wasn’t successful. If I had got upset at my first attempt I would never have had this opportunity.

Finally, by half time, I convinced the owners of a house near the stadium to let me go on to their roof.

I could do my job for an entire half of the match, although I was not able to see one part of the pitch because there was a tree right in front of me!

I wasn’t scared. The police in the stadium saw me that night but they did nothing and left me alone as I did my job.

I felt very excited to be taking photographs of such a high-level football match in Iran, especially in that particular situation.

The on-site photographers were busy capturing interesting shots of the game but when they saw me on the roof they took my photo. I think all of them did!

I found the pictures of me on various social networks and some others were sent to me by my friends. People in Iran reacted very positively and all I have received is positive energy.

I have to confess that all of this reaction and positive feedback was a bit weird for me at first. I was not thinking about what the reaction would be in the first place, I was just focused on taking photographs.

I love football and it’s how I started in sports photography. I went to Turkey to cover the friendly match there with Iran just before the World Cup in Russia.

I’ve also covered volleyball matches because in Iran most of the restrictions are placed on football, not on other sports.

But my dream is to be able to take photos of Manchester United playing football at Old Trafford at least once in my lifetime. I would also like to be a professional photographer who can travel to different continents to take photos of sports matches around the world.

I will do my best to make this dream come true, but my biggest dream is to see women have the same opportunities as men when they come to football stadiums in Iran.