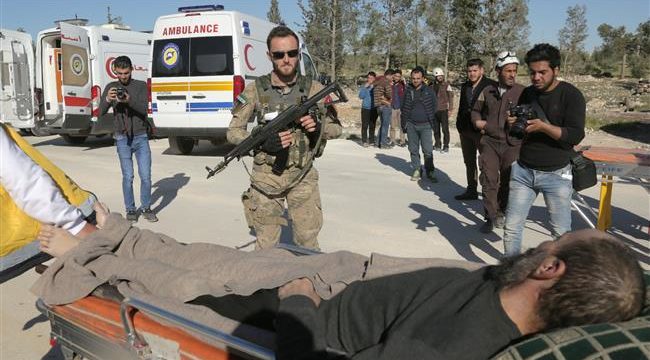 Press TV – A monitoring group says at least 39 civilians, including 12 children, have lost their lives and dozens of others sustained injuries when a powerful explosion ripped through a weapons depot in Syria’s militant-held northwestern province of Idlib.

Rami Abdel Rahman, the head of the so-called Syrian Observatory for Human Rights (SOHR), said the blast occurred in a residential building in town of Sarmada near the border with Turkey, and caused two buildings to collapse.

The Observatory added that the ammunition depot belonged to an arms dealer working with the Hay’at Tahrir al-Sham, commonly referred to as Tahrir al-Sham, terrorist group, and was situated in the Bab al-Hawa neighborhood of Sarmada.

An unnamed civil defense source from the so-called White Helmets team told AFP that women and children were among the dead.

But rescue workers have pulled out “five people who were still alive,” the source added.

Most of Idlib is controlled by Tahrir al-Sham Takfiri terrorists, but Daesh terror group also has sleeper cells in the area.

A series of explosions and assassinations, mainly targeting high-ranking militant commanders and members of terror outfits, have rocked the province in recent months.

While Daesh has claimed responsibility for some attacks, they are mostly the result of infighting among rival militant groups.

Around 2.5 million people live in Idlib province, and half of the residents have been displaced by foreign-sponsored militancy in other parts of Syria.

Elsewhere in the west-central province of Hama, at least 14 civilians were injured when a roadside bomb targeted their vehicle.

SOHR said the explosion occurred as a passenger bus was traveling along a road near al-Tuwayni village in the Qalaat al-Madiq sub-district of the province.

On May 21, the General Command of the Syrian Army and Armed Forces announced in a statement that complete security was restored to Damascus and its countryside after al-Hajar al-Aswad district and al-Yarmouk camp were totally purged of Daesh terrorists.