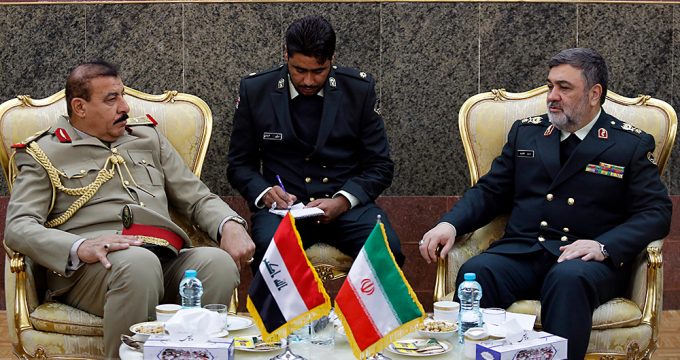 Promotion of Tehran-Baghdad security cooperation is inevitable, Ashtari said in a meeting with visiting Commander of the Iraqi Border Guards Major General Hamid Abdullah Ibrahim and his accompaning delegation.

He further referred to the presence of terrorist groups in certain joint border areas to create insecurity in the region, stressing the two neighboring countries should enhance bilateral cooperation to counter the terrorists.

Mentioning Iran-Iraq cordial relations, as well as their commonalities, Ashtari said the two countries have reached good achievements and agreements to promote bilateral cooperation in the field of border security.

The main duty of the Iranian and Iraqi border guards is to strengthen security in joint border areas, the Police official stressed.

Referring to Iran’s high capacity to ensure security in border areas in shortest time, Ashtari expressed Tehran’s readiness to cooperate with the Iraqi police to foil the plots of their common enemies- Israel and US- which are acting against regional peace.

Iran is ready to promote relations with Iraq to solve security problems in order to draw a bright future for the two countries, Ashtari added.

Referring to the situation of Iraq after the execution of the Iraqi dictator Saddam Hussein in 2006 and the problems created for the Iraqi people after that, Ashtari said Iran stood by the Iraqi nation and government during the presence of the terrorist group of Daesh (ISIS) in that country.

He further described Daesh as a plot imposed by the US officials on the Iraq.

Surely, if political groups in Iraq and the Iraqi people keep their unity, their problems will be solved, the Iranian Police chief added.

Ashtari, then, expressed Iran’s readiness to train the Iraqi border guards and share their experiences with them.

As for the forthcoming Arbaeen ceremony in Iraq, Ashtari said all measures and coordination have been taken and ensured between the two countries to successfully hold the ceremony like the previous years.

The Arbaeen mourning ceremony is one of the largest religious gatherings in the world. It marks the 40th day after the martyrdom anniversary of the grandson of Prophet Mohammad (PBUH), Imam Hussein (AS), the third Imam of the Shiite Muslims.
Each year, millions of pilgrims, mainly from Iraq and Iran, travel long routes on foot to Karbala, where the holy shrine of Imam Hussein (AS) is located to mark the anniversary of Imam Hossein’s martyrdom.
Ashtari said Tehran is ready to re-open the Khosravi border in west of Iran to facilitate border-crossing of the two countries pilgrims during the Arbaeen procession.