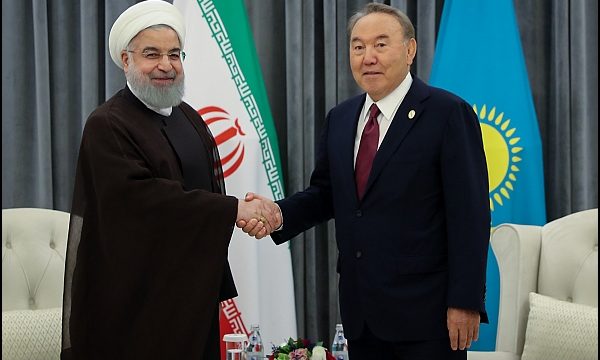 Rouhani made the remarks Sunday in a meeting with his Kazakh counterpart Nursultan Nazarbayev.

The meeting was held on the sidelines of the Caspian Sea Littoral States summit.

He urged both sides to take advantage of the capacities in line with developing interests of Iran and Kazakhstan and regional nations.

Iran is determined to establish friendly and stable relations with Kazakhstan; he said adding that Tehran attaches importance to developing relations with Astana since they indicate the historic depth and cultural commonalities of both nations.

Pointing to the fact that Tehran and Astana are standing by each other in regional and international issues, Rouhani said that Kazakhstan active presence in regional developments especially in Syrian peace talks has been effective.

Kazakhstan has always been beside Iran in international issues such as the nuclear deal also known as the Joint Comprehensive Plan of Action (JCPOA), he said.

Rouhani went on to say that both countries have many capacities for joint investment and providing services.

Iran and Kazakhstan capacities in different fields, especially in the transit sector are complimentary meaning that Kazakhstan would be able to be connected to southern seas and Iran will be able to be linked to China through Kazakhstan, Rouhani said.

He underlined boosting banking ties, and said Tehran and Astana will be able to take major strides in developing bilateral relations by establishing more brokerage ties.

Nazarbayev, for his part, described as friendly relations between two countries.

The trade ties between Iran and Kazakhstan experienced considerable growth over the past few years, he said that Kazakhstan is determined to reinforce them.

He referred to Iran as a friend and a regional partner for Kazakhstan, saying we have always been after cementing ties with Tehran.

Pointing to Iran historic role in the region, Nazarbayev said despite the problem happened for Iran from our sides. ‘We are sure that a civilized and an ancient country like Iran will go through difficulties.’

Kazakhstan support implementation of Iran nuclear deal and is determined to increase its ties in different aspects with the Islamic Republic of Iran.

Establishing trade based on national currencies will be to the benefit of both countries, he reiterated.