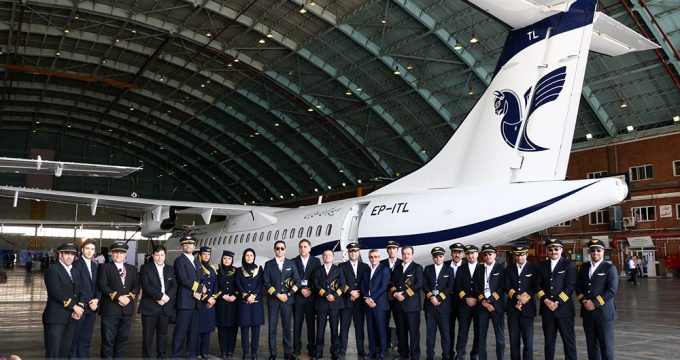 Bloomberg | Golnar Motevalli: Iran’s Mehrabad International Airport may have seen one of the final benefits of the 2015 nuclear agreement.

As the U.S. prepares to slap new sanctions on the Iranian economy this week after pulling out of the accord, state-run Iran Air took delivery on Sunday of five passenger planes manufactured by ATR, a venture between France’s Airbus SE and Italy’s Leonardo SpA, after France secured American approvals to send the aircraft. In a ceremony at the airport, Iran Air’s top executive suggested that Europe could do more to rescue the deal it co-signed in 2015.

The delivery of the ATR planes shows how the European Union can protect the companies doing business with Iran from the impact of U.S. measures — if it wants to do so, Chief Executive Officer Farzaneh Sharafbafi said, according to the official Islamic Republic News Agency.

Iran had ambitious plans for its aviation industry after the nuclear deal, which removed a number of crippling sanctions. Officials set out to modernize the country’s aging fleet, signing a $19 billion deal with Airbus for 100 aircraft. Separately, Boeing Co. and Iran Aseman Airlines inked a $3 billion agreement for 30 737 Max jets, and the U.S. company also struck a $16.6 billion deal with national carrier Iran Air for 80 aircraft.

Yet three months after President Donald Trump’s decision to exit the agreement, Iranians are bracing for fresh sanctions with a mix of disappointment, anger and resignation. Many blame the U.S. for trying to cut off the Islamic Republic from the global economy. Others fault the government of President Hassan Rouhani for failing to take advantage of the three years that followed the agreement’s signing to fix the country’s economy and clamp down on corruption.

“Mr. Trump has made things worse, of course, but the problem is here, too,” said Arash, 26, who works part-time for ride-hailing app Snapp, a local version of Uber. He declined to give his last name because of sensitivity about speaking to foreign media in Iran.

“Everything looks normal, but everyone’s dissatisfied,” he said.

Public discontent has been rising as tension with the U.S. helped push Iran’s currency to record lows in the unregulated market. One person was killed and 20 other detained in the city of Karaj, west of Tehran, in a protest on Friday. In another town, about 500 people used stones and bricks to smash the windows of a seminary and tried to set the building ablaze, local media reported.

In response, the government said it will take measures on Monday to stem the currency’s decline. Under the package, the central bank will strictly limit access to official, fixed currency rates to essential imports. Also approved were steps to tighten the process of allocating foreign currency to businesses and crack down on corrupt practices and currency manipulation, the semi-official Iranian Students’ News Agency reported.

Many Iranians first voted for Rouhani in 2013 hoping that the nuclear agreement would revive foreign investment and end Iran’s isolation after years of crippling sanctions. Oil exports surged, but job creation couldn’t keep pace with demand in a country where over 60 percent of the population is under 30. Months after the moderate cleric won a second four-year term, the economy is on the brink of another crisis.

The U.S. this week will ban purchases of dollar banknotes by Iran, prevent the government from trading gold and other precious metals, and block the nation from selling or acquiring various industrial metals. The measures also target the auto industry, and will ban exports of Persian carpets and pistachios to the U.S.

A second round of sanctions targeting Iran’s oil imports and energy and petrochemicals industries are scheduled to come into effect in November.

In central Tehran, on a street lined with opticians, there was little to suggest the city is on the edge of unrest. The shops selling spectacles all have gleaming displays with posters featuring luxury fashion brands and knock-offs in their window displays. Yet most of them were empty.

“All our prices have gone up a lot since the start of the year, and our sales are definitely down a lot,” said Mostafa, who’s been working as a salesman for 15 years. “We really don’t know what’s going to happen once our suppliers can’t import. We’re just dealing with things one day at a time.”

Still, Mostafa said his country has little choice in how to respond to Trump.

“We have to stand up to him, we shouldn’t talk to him,” he said. “You cannot talk to someone like this.”