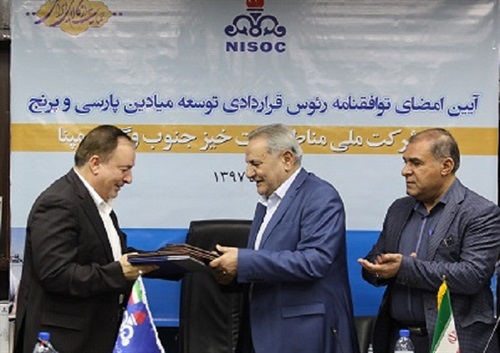 SHANA — The National Iranian South Oil Company (NISOC) has signed a heads of agreement with MAPNA Group for the development of Parsi and Paranj oilfields in the southwestern province of Khuzestan.

The document was signed on Monday, August 6, by NIOSC CEO Bijan Alipour and Mojtaba Gharavi, director of MAPNA’s oil and gas section.

MAPNA Group is a group of Iranian companies involved in development and execution of thermal and renewable power plants, oil & gas, railway transportation and other industrial projects as well as manufacturing main equipment including gas and steam turbines, electrical generator, turbine blade and vane, HRSG and conventional boilers, electric and control systems, gas compressor, locomotive and other pertinent equipment.

Addressing the signing ceremony of the document, Mr. Alipour said NISOC had signed 18 memoranda of understanding (MoUs) with 8 domestic and foreign oil heavyweights for the development of Parsi, Karanj, Ragsefid and Shadegan oilfields.

Back in April, the company signed an MOU with PERGAS consortium for developing Karanj oilfield.

Parsi and Paranj are being operated with gas injection and their development projects are aimed at adding 30,000 to 40,000 barrels to their daily output.

The NISOC CEO further said that enhanced production of crude oil and gas liquids, generation of jobs, bolstering the business environment and tapping domestic potentialities were targeted by developing the fields.

MAPNA Group has currently signed $3.5 billion dollars’ worth of contracts with the Iranian Ministry of Petroleum. By signature of this recent document, a new chapter has opened in the group’s cooperation with the ministry, Mr. Gharavi said in the ceremony.