RT – Yemeni civilians are “starting” to be at risk after Saudi-led airstrikes hit a hospital, Nikki Haley said in puzzling statement about the US and UK-backed campaign that has lead to thousands dying from bombs and starvation.

Speaking before the Security Council, the US envoy to the United Nations began her remarks by condemning the Houthi rebels – and Iran – before venturing into uncharted territory: tepid criticism of the Saudi-led invasion of Yemen. Haley expressed concern about reports that the Saudi-led coalition – backed by US weapons and logistical support – bombed a “fish market and a hospital” in Yemen’s port city of Hodeida, and may have caused “dozens of casualties.”

“We’ve hit a new day now in Yemen. And we’ve hit a new sense of urgency in Yemen,” Haley said during a UNSC briefing on Yemen on Thursday.

“If this is what’s starting to happen, civilians are at risk, infrastructure is at risk, and we as the international community have to demand that the two parties come together and understand the seriousness of this.”

The US envoy added that “the idea that strikes almost hit some of the water tanks, with the cholera outbreak, all of these things are starting to show a disregard for the people on the ground in a time when they are already suffering so much.”

With more than 20 million Yemenis dependent on humanitarian aid and some 8 million on the verge of starvation – not to mention the more than 1 million suspected cases of cholera – Haley’s new sense of “urgency” perhaps stems from the fact that it was revealed in June that the US military is helping the Saudi-led coalition “fine-tune” its list of airstrike targets in Hodeida. The intelligence and logistical support is allegedly aimed at minimizing civilian casualties as the coalition attempts to take the port city.

We can confirm that the country has now reached 1 million suspected cases of cholera.

Commentators quickly noted that Haley’s insinuation that Yeminis were only now “starting” to face a humanitarian crisis was a rather rosy interpretation of the 3-year conflict. Saudi-led airstrikes targeting hospitals and civilian infrastructure have been far more frequent than Haley’s statement seems to suggest. For example, a Saudi-led coalition strike destroyed a newly-built Doctors Without Borders facility in Yemen in June. 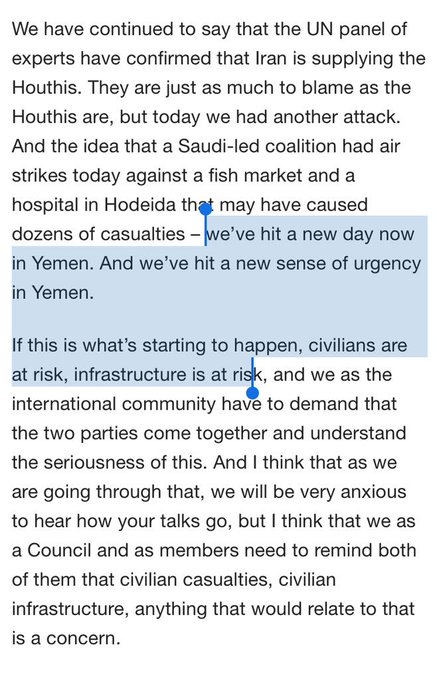 Characteristically mindless comments from Nikki Haley. Mass civilian casualty Saudi airstrike on Hodeida marks a “new day” as civilian deaths are “starting to happen.” By her logic, the US backed war on Yemen was neat and clean until now. https://usun.state.gov/remarks/8540

Haley’s statement makes it seem as if she was just made aware of the humanitarian catastrophe in Yemen, Michael Maloof, a former Pentagon security analyst, told RT, describing the overdue concern as “unfortunate.”

“The United States is actually supplying a lot of the logistics and the intelligence for the Saudis. And you don’t hear too much criticism. She should have been out there months ago, condemning the humanitarian catastrophe that’s occurring in Yemen. You just can’t be nice about this any longer, or overlook it, because it’s gone on for too long, and too many people have been killed,” Maloof said.

Haley’s account of the recent strikes also appear to be a bit more optimistic than reports from the UN’s children’s agency, UNICEF. According to the agency’s executive director, Henrietta Fore, a UNICEF-supported sanitation center in Hodeida came under attack on July 28, damaging the facility’s fuel tank. A day earlier, she said, the water station in the district of al-Mina, which provides Hodeida with most of its water, was hit.

“We received reports that a UNICEF-supported warehouse containing humanitarian provisions, including hygiene and water-related supplies, was hit by two airstrikes,” Fore said in a statement.

“Attacks on water infrastructure jeopardize efforts to prevent another outbreak of cholera and acute watery diarrhea in Yemen,” she added.

Saudi Arabia and its allies launched their first airstrikes against Houthi rebels in Yemen in March 2015, in an attempt to bring deposed President Mansour Hadi back to power. Since then more than 5,500 civilians have been killed and over 9,000 injured, according to the UN.

The US has played a key support role in the Saudi-led air campaign in Yemen. US and British military officials have access to lists of targets, and even advise their Gulf allies from a command and control center used by the Saudis to carry out airstrikes, according to the Guardian.