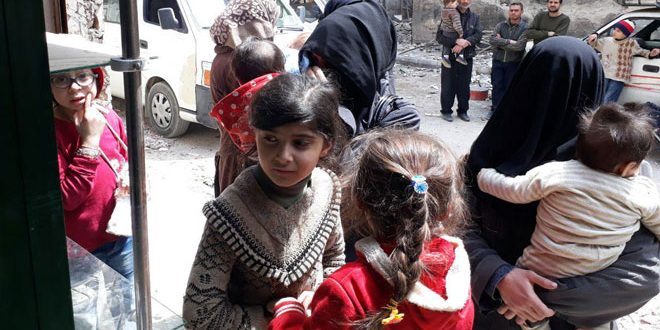 MNA – Some 300,000 people benefited from relief aid and medical services in the villages and towns of Daraa countryside which were liberated recently by the Syrian Arab Army from terrorist organizations.

He added that the cadres from the branch have engaged in a multifaceted humanitarian response, including providing relief materials, various medical services and reached 300,000 people within a month.

The branch will continue to provide assistance to all areas of Daraa province, he added.

In turn, Mohamed Rami al-Ahmed, chief of the SARC’s emergency teams in Daraa said the branch has provided 3 mobile clinics in the liberated villages of Daraa countryside, which provided daily medical services for more than 1500 people as well as the distribution of chronic illness medicines, medicines for children and antibiotics.

Al-Ahmad pointed out that 7 ambulances are ready to transport cases requiring treatment inside hospitals.

The Syrian Arab Army units liberated Daraa countryside from terrorist organizations, while the armed groups in many villages and towns capitulated following a military operation by the Syrian army and handed over their weapons, which secured citizens in their homes.