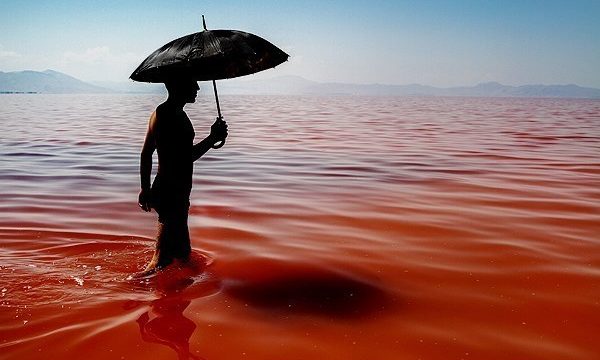 MNA – Talking about Lake Urmia, a body of water shared between East and West Azarbaijan provinces in northwestern Iran, chief of Iran’s Department of Environment (DOE) put emphasis on the fact that no water transfer scheme is underway for restoration of the lake.

In order to revive the lake many believe that the only solution left is water transfer which is a man-made conveyance schemes which move water from one river basin where it is available, to another basin where water is less available or could be utilized better for human development. Inter-basin water transfer from the Caspian Sea or even from other countries such as Turkey are of the options being considered to help restore the lake.

Improving the efficiency of water use by plant breeding, closing illegal wells around the lake basin, 24 percent decrease in water consumption in agriculture sector as well as stopping dam constriction on the rivers that feed the lake are of the measures taken to help restore the lake, Issa Kalantari said over a live radio broadcast on Tuesday.

Public must be encouraged to produce less waste

Setting up such plants is out of question, “we should concentrate on encouraging the public to produce less waste,” he suggested

Elsewhere in his remarks DOE chief lamented that Majlis [the Iranian parliament] has disapproved the proposed budget for waste management for the current Iranian calendar year (started March 21).

Waste management was a priority for the current administration and some 1.3 billion dollar was proposed for the matter in the proposed budget bill for the current fiscal year (March 2018-19), however, Majlis disapproved it.

The budget was primarily considered for waste management in Northern Province of Iran, but not allocating the proper budget is nearing the northern cities, the rivers, forests to environmental degradation, Kalantari regretted.

Hosseinali Ebrahimi, head of Mazandaran province’s department of environment, said in May that some 3,000 tons of waste is generated every day in the northern province of Mazandaran and is buried in unsanitary landfills.

Ebrahimi also said that there are 27 unsanitary landfill sites in the province which are posing various threats to the region blaming tourism industry of the region as one of the underlying reasons behind high waste generation in the area.

In June 2017 the then deputy director of the Department of Environment Saeed Motesaddi said that some 18 liters of leachate is being drained from the waste piled up in landfills in northern cities per second saying that “this is an environmental disaster”.

As per a report published by United Nations Industrial Development Organization (UNIDO) in October 2016, coastal cities in Iran are in dire straits. 5 percent of the total waste in Iran is produced in northern coastal cities and the daily waste generation per capita is 800 grams.

In coastal cities, formal waste disposal accounts for only 3% of all waste disposal; in these areas there is a lack of suitable locations for landfills and urban areas are jammed between the coastline and mountains.

Kalantari further noted that it is possible to burry waste in landfill in regions with dry climate but in northern Iran with a humid climate it’s not practicable to bury the waste.

Inquired about water shortage DOE chief explained that the growing population with less-improved environmental awareness and increased use of all forms of energy are aggregating water shortage in the country.

That and lower precipitation amounts and higher than average evaporation rates are also exacerbating the current condition.

In late July, environmental official Mohammad Mojabi,  warned that renewable water resources has drastically decreased to less than 100 billion cubic meters from 132 bcm over the past 50 years, and mean precipitation has dropped from 250 millimeters to 205 millimeters over the same period.

He regretted the fact that “we” are ignoring the carrying capacity of the water resources by overexploiting them.

Kalantari explained that the country’s main concern is water and inefficient use of energy.

“We have set up steel companies in arid regions such as Isfahan while they must be established in coastal areas.

“Therefore, as per the new guidelines issued by the Department of Environment the thirsty industries cannot be established in arid cities and should be set up in coastal lands.”

Sand and dust storms in Khuzestan: you reap what you sow

Leader of the Islamic Revolution Ayatollah Ali Khamenei has agreed with a request to withdraw 100 million dollars from the National Development Fund to counter dust storms in Khuzestan, he said, adding that some measures are already being taken to fight the storms but there must be through research for the projects to be fully effective.

He explain that the researches on sand and dust storms will be thorough by the end of the sixth [Iranian calendar] month of Shahrivar (September 23) but the issue won’t go away in one or two years.

“What is overlooked in this year’s budget bill is the issue of sand and dust storms in the southeastern province of Sistan-Baluchestan so that the aforesaid budget can be solely used to mitigate the storms in Khuzestan, we hope to be able to get budget for Sistan-Baluchestan next year.”

Asked about the effects of the new sanction against Iran on the environment Kalantari explained that the Ministry of Oil is doing its best to increase fuel quality and now some 70-75 percent of euro-4 gasoline is being produced in the country.

However, he regretted the fact that the ministry of industry that was tasked with producing automobiles which live up to international standards has announced that they cannot fulfill its pledges due to the sanctions.