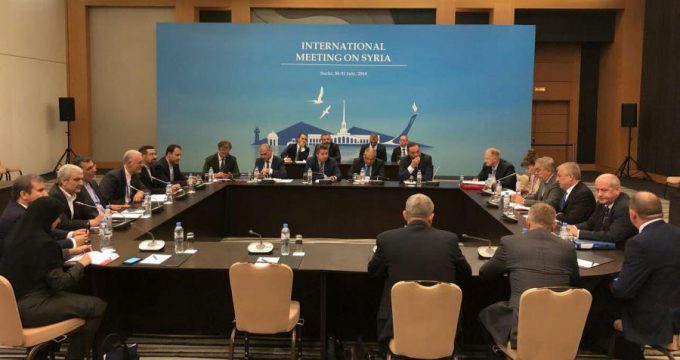 The fear and hope of Sochi Summit

Iranian Diplomacy | Ramin Hossein Abadian: The 10th round of the Astana-format talks in the Black Sea resort of Sochi began on Monday and ended on Tuesday. Delegations from the Syrian government and the political opposition attended the Russian city on the conflict in Syria. It was spearheaded by Russia, Turkey and Iran.

Staffan de Mistura, the United Nations’ special envoy for Syria, too, participated in the meeting within the framework of the Astana diplomatic track. Bashar Jaafari, Syria’s ambassador to the UN represented the Syrian government in the talks.

Talks have utilized a two-year-old UN Security Council resolution endorsed by de Mistura as the basis for achieving a political transition plan.

During the ninth Astana meeting held in May, all parties agreed to maintain the de-escalation zones that were meant to observe a ceasefire.

Idlib, the last stronghold of the terrorist Al-Nusra Front in Syria, is part of the Russian-brokered “de-escalation” agreement aiming to shore up ceasefire in some parts in western Syria.

It is remarkable that the Damascus government has upper hand in taking the initiative in resolving the crisis compared to opposition groups as well as the Takfiri terrorist groups. The Syrian military has so far had many gains in the southern country, and this huge achievement is the winning hand for the Damascus delegation’s talks on the threshold.

The advances of the Syrian forces in the battle against the Takfiri terrorists have continued to the extent that according to recent statistics and reports, so far, more than 90% of the area of Daraa has been fully liberated. This is despite the fact that the Takfiris and their regional and trans-regional allies, including the US, did not anticipate such a successful victory by the Syrian resistance forces.

With this great achievement, the Syrian forces have proved that the threat posed by the US to avoid the Damascus government from entering the war against terrorism in the southern country has been absurd. The city of Daraa is located on the common borders with Jordan and is very important in this regard. The domination of the Syrian army over the city of Dara will neutralize the Takfiris’ move on the common borders of Syria and Jordan, and no further threats from these borders will affect Syria.

Lack of cooperation between the Jordanian government and the Damascus authorities, has negatively affected Jordanian border where the Takfiri terrorist groups have carried out their atrocities during the past years. Another important issue is Daraa city near Damascus. The short distance between Daraa and Damascus as the capital of Syria has led to the establishment of peace and stability in Daraa as a tranquility and stability in Damascus. Therefore, Deraa is also very important in this regard.

In addition to the city of Daraa, the Syrian military also succeeded in gaining many achievements in Quneitra. According to the latest news and reports, Syrian military personnel are only two districts away in liberating Quneitra. If they can clear the two areas over the next few days from the Takfiri terrorists, then the Takfiri case will be closed forever in Quneitra.

What is certain is that the United States does not want any peace talks in Sochi city under any circumstances. Americans are after completing their plan to create autonomy for al-Nusra Front Terrorists in the southern Syrian axis. A plan, that certainly, with the striking advances of resistance in the southern axis and its achievements, is somehow strangled in the spit and does not seem to end there.

The Syrian army is currently planning a major military operation in Idlib.  If opponents do not have the opportunity to negotiate the current peace and continue their fierce pursuit, it will not be long before a massive resistance campaign in Idlib takes place. It seems that the current talks are opponents’ last opportunities in Syria.