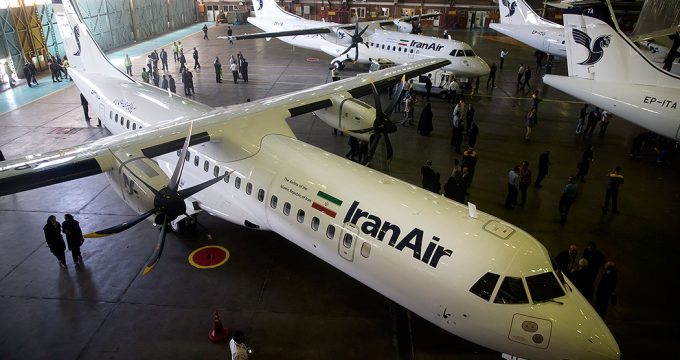 Bourse and Bazaar | Esfandyar Batmanghelidj: In a recent interview, French Economy Minister Bruno Le Maire expressed optimism for the delivery of eight ATR turboprops to Iran as part of a contract with Iran Air, the country’s national airline.

The encouraging comments come after Le Maire disclosed two weeks ago that the United States had rejected a joint European letter requesting a broad range of waivers and exemptions that had been sent to Secretary of Treasury Steve Mnuchin and Secretary of State Mike Pompeo in June.

In a change of tone, Le Maire spoke of being “hopeful that the United States will provide authorization to deliver these aircraft.” The ATR deliveries, like the three Airbus deliveries made prior to President Trump’s withdrawal from the Iran nuclear deal, are highly symbolic of the hope and expectations for increased trade and investment following the implementation of the Joint Comprehensive Plan of Action (JCPOA).

To date, Iran Air has received an initial eight ATR aircraft, having signed a contract in April 2017 for 20 planes. Iran Air is using these planes as part of a new regional service.

The ATR contract, like so many others, was immediately put in doubt following President Trump’s withdrawal from the nuclear deal on May 8 and the announcement that the US would be reimposing secondary sanctions that had been removed as part of the JCPOA. Having already manufactured the aircraft on specification for Iran Air, only to see delivery delayed by financing issues related to sanctions concerns, ATR announced it would seek a new licensefrom the US Treasury to permit the delivery of the aircraft following the US withdrawal form the nuclear deal.

In July, US Department of Treasury assistant secretary of terrorist financing Marshall Billingslea downplayed the likeliness of any such licenses being granted, telling FlightGlobal, “At this stage, I think we are not in a position to suggest we would be issuing such licenses.” Billingslea cited an inability to “show flexibility on transactions.”

But Le Maire’s comments will give rise to new hope that the US authorities may be adopting a more flexible stance. The French minister disclosed that he has been “negotiating for weeks” with his counterpart, Mnuchin, “fighting so that in the health sector, in the agri-food sector, which are now sanctions exempt, there may be funding channels that remain open.”

In the context of this fight, the delivery of the ATR aircraft will prove the most clear indication of US flexibility. There are three reasons US authorities might decide to issue a waiver. First, ATR’s smaller aircraft are used for regional routes. This limits concerns of possible “dual use” of the aircraft for military applications. US authorities have sanctioned Iranian airlines and aircraft for conducting “resupply” flights to the conflict in Syria. Such concerns clouded the Airbus and Boeing contracts for larger commercial aircraft.

Second, unlike Airbus aircraft, ATR turboprops, manufactured under a joint venture between Airbus and Italian aerospace company Leonardo, have limited US parts content. According to ATR executives, US components account for “slightly over 10%” of total parts content, or just above the sanctions threshold. Additionally, the aircraft are already manufactured, meaning that there is no further activities necessary with US entities along the supply chain.

Finally, there is a clear humanitarian justification. As shown by the tragic crash of an Aseman Airlines ATR 72 in February, smaller aircraft are especially vulnerable to accidents caused by aging and poor maintenance. Improving air safety has been a primary consideration for Iranian authorities as they sought to acquire new aircraft following the lifting of sanctions.

A focus on delivering eight turboprops and protecting banking channels for sanctions exempt sectors does not equate to a full-defense of French business interests in Iran. It is clear that Iran contracts of leading French enterprises such as Total, Peugeot, Alstom, and Airbus remain outside the scope of compromise with the US Treasury.

However, even a small victory would be important for Le Maire, as it would push the Trump administration into a mindset of negotiated compromise rather than blanket rejection. The Trump administration is unlikely to announce any softening in their position. So the clearest indicator will be whether the eight ATR aircraft make their long-awaited flights to Tehran. The eyes of a nation will be watching.