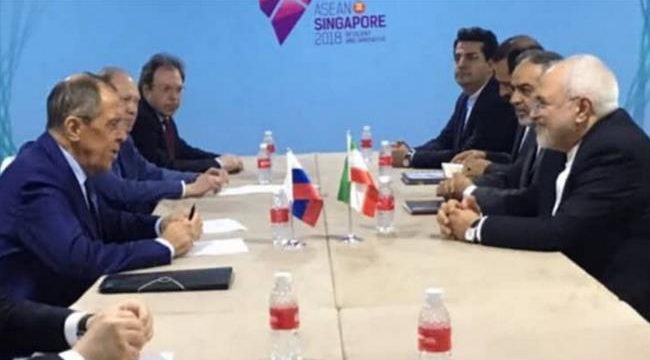 Zarif, who is in Singapore to attend a ministerial meeting of the Association of Southeast Asian Nations (ASEAN), had a meeting with Lavrov on the sidelines of the Asian summit.

During the talks, the two sides discussed Tehran-Moscow relations, particularly economic cooperation, and regional and international issues including the Iran nuclear deal, the Caspian Sea and the Syria conflict. French FM Le Drian also called Zarif earlier in the day and had a phone conversation with him. The two diplomats discussed the latest developments regarding the JCPOA and certain ways through which Iran can exploit the nuclear deal’s economic benefits.

The talks were held as part of Europe’s efforts to express its determination to maintain its business links with Iran. The bloc has already presented Tehran with a package of incentives to help save the JCPOA after the US’ unilateral withdrawal in May.

Iran’s President Hassan Rouhani earlier noted that the ball is now in Europe’s court to make up for Washington’s absence and work to keep the landmark agreement alive.

Rouhani made the remarks on Tuesday during a meeting with Britain’s new Ambassador to Tehran Rob Macaire. “Today, we are at a very important historic moment regarding the JCPOA.”

The president said the European parties need to transparently declare what measures they intend to adopt in order to make up for Washington’s “illegal” pull-out from the Iran deal.