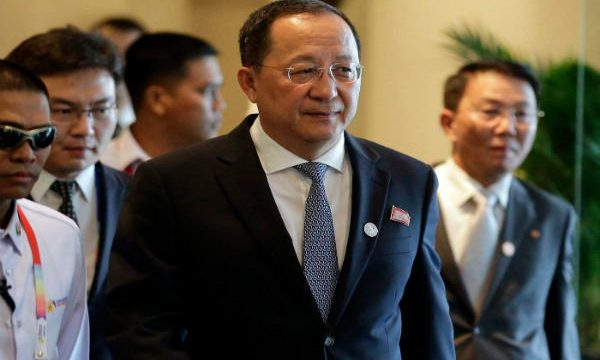 According to Kyodo news, North Korean Foreign Minister Ri Yong Ho left Pyongyang on Thursday for an ASEAN-related meeting due to be held later this week in Singapore. Kyodo quoted informed sources as saying that Ri plans to reach Singapore on Friday, flying in from Beijing.

“Ri is expected to make an official visit to Iran after participating in Saturday’s ASEAN Regional Forum meeting of the 10-country regional bloc and other forum members,” Kyodo quoted sources with knowledge of the North Korean FM’s itinerary.

Neither Iranian officials nor North Korean authorities have yet confirmed Kyodo’s report.

The ministers of ten member states, as well as the ministers of observer countries, including Iran, will discuss the latest regional and trans-regional developments in the 51st session of the Association and the subsidiary meetings, the 19th meeting of ASEAN Plus, the 8th ministerial meeting of East Asia, and the 25th regional conference of ASEAN.

Iran’s Foreign Minister Javad Zarif is in Singapore to sign the Treaty of Amity and Cooperation with ASEAN.

US Secretary of State Mike Pompeo will also be in Singapore on Friday to take part in the ASEAN meeting.

Leaders of US and North Korea met in Singapore back in June, following which Japanese prime minister voiced readiness to meet with Leader Kim Jong-un. It remains to be seen whether North Korean FM would meet with Pompeo and Japanese Foreign Minister Taro Kono on the sidelines of the regional forum.