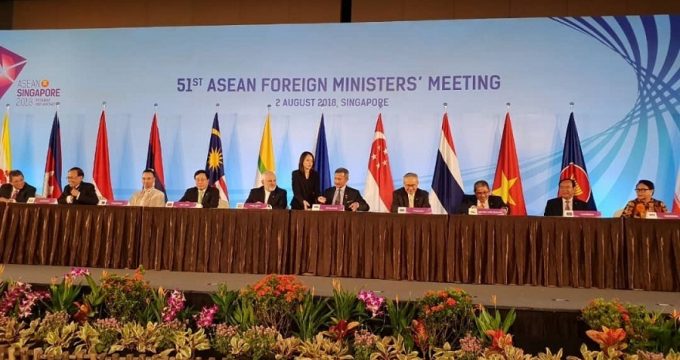 Tasnim – The Association of Southeast Asian Nations (ASEAN) accepted Iran as a member of the Treaty of Amity and Cooperation in Southeast Asia (TAC) on Thursday.

In a ceremony on the sidelines of the 51st ASEAN Foreign Ministers’ Meeting in Singapore on Thursday, Iran officially joined the Treaty of Amity and Cooperation in Southeast Asia.

On Wednesday, Zarif met Singapore’s Prime Minister Lee Hsien Loong for talks on the bilateral ties, the major regional and international issues, as well as the Joint Comprehensive Plan of Action (JCPOA), the multilateral nuclear agreement with Iran from which the US government withdrew back in May.

In separate meetings, the Iranian foreign minister has held talks with his Japanese, Filipino and Turkish counterparts on the sidelines of the ASEAN meeting to discuss the bilateral, regional and international issues.