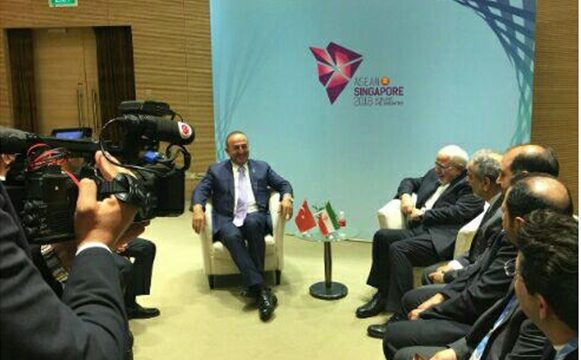 IFP – Iranian Foreign Minister Mohammad Javad Zarif has sat for talks with a number of high-ranking Asian officials on the sidelines of the ongoing ministerial meeting of the Association of Southeast Asian Nations (ASEAN) in Singapore. Zarif, who arrived in Singapore on Wednesday evening, held a meeting with his Japanese counterpart Taro Kono on Thursday morning. The two top diplomats talked about bilateral relations, the Iran nuclear deal and other issues of mutual interest.

After the meeting, Zarif attended a luncheon hosted by his Japanese counterpart.

Earlier in the day, Zarif had held talks with his Filipino counterpart Alan Peter Cayetano, during which the two sides discussed ways of developing bilateral relations and most important international developments. Zarif also held a separate meeting with his Turkish counterpart Mevlut Cavusoglu. Bilateral relations and regional and international issues were the main topics of discussions between the two sides.

While in Singapore, Zarif also met with the country’s Prime Minister Lee Hsien Loong. During the talks, the two sides discussed bilateral relations, the Iran nuclear deal and the most important regional and international issues.

Before sitting for talks with his Asian counterparts, Zarif attended the 51st ministerial meeting of the ASEAN.