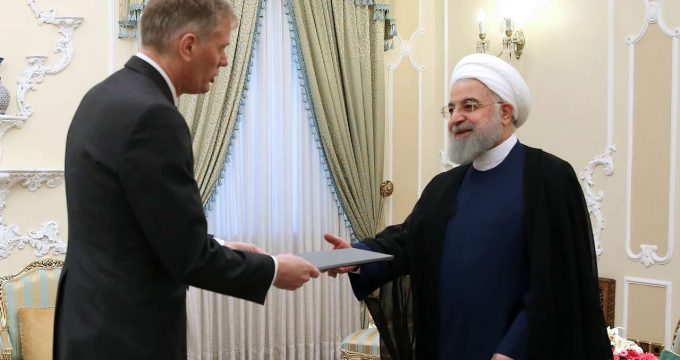 Rouhani says Iran won’t give up rights to export oil

MNA – Iranian President Hassan Rouhani said Tehran does not want any problem to happen for world’s waterways, but at the same time, it will never let go of its rights to export oil.

President Rouhani made the remark in a meeting with British Ambassador to Tehran Rob Macaire on Tuesday while receiving his letter of credence.

“Today, we are in a very critical point in history regarding the Joint Comprehensive Plan of Action (JCPOA) and Europe’s transparent measures to compensate for the US’ unlawful withdrawal from the deal is very important for the Iranian nation,” Rouhani said at the meeting.

“The Islamic Republic of Iran has never sought tensions in the region and does not want any problem to happen for world’s waterways, but it will never let go of its rights to export oil,” he added.

Rouhani then criticized the faulty implementation of the nuclear deal in business and economic sectors, as well as banking relations by some signatories, saying “Iran is always ready to develop relations with European countries and now, after US’ illegal pullout from the JCPOA, the ball is in Europe’s court in the remaining limited time.”

For his part, British Ambassador to Tehran Rob Macaire stressed that the British government supports the implementation and continuation of Iran nuclear deal.

He noted that European countries, in an unprecedented move, are scraping to preserve the nuclear deal, particularly with respect to economic transactions.

Iran’s de-escalation policies in the region are very important, he said, adding “we are seeking to further develop relations with Iran and believe that resolving crises and issues is only possible through dialogue and diplomacy.”