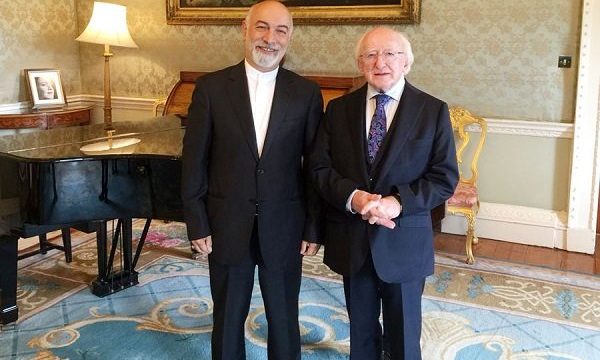 Many grounds for Iran-EU coop.

MNA – President of Ireland Michael D. Higgins highlighted that there are many grounds for bilateral cooperation between Iran the European Union.

He made the remarks in a Monday meeting with Javad Kachuian, Iranian ambassador to Ireland.

Elsewhere, the Irish president emphasized the importance of boosting bilateral ties between the two countries, adding that, the two-fold increase of ties during the last year was in favor of both nations.

He appreciated the efforts of the Iranian envoy in past years and send his warm greetings to his Iranian counterpart Hassan Rouhani.

Kachuian, for his part, referred to the increased level of ties between the two countries in past 4 years, adding that Iranian officials are determined to expand bilateral cooperation.

Iran nuclear deal, Iran-EU ties, Iran-Ireland relations, Javad Kachuian, Michael D. Higgins July 31, 2018
Direct warfare with the US is out of the question for Iran, analysts say — here’s why
Judiciary chief: Iran mightier than ever at Israeli borders