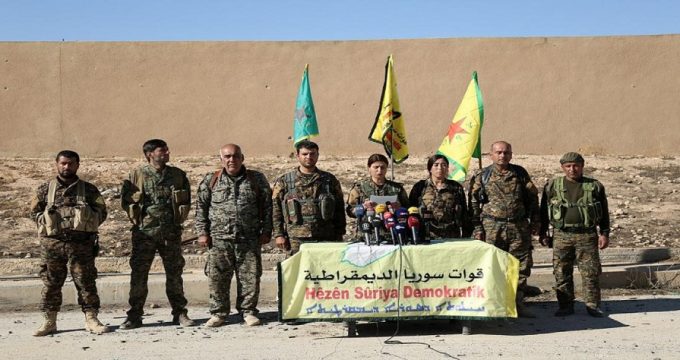 What is pushing Syrian Kurds to seek reunion with Damascus?

Alwaght – As the Syrian crisis is nearing its end and government forces keep crushing terrorists and restoring the official rule over the country, the US defeats on the ground grow noticeably distinct. The latest Washington’s loss is the US-backed Kurdish militants’ inclination to seal a deal with the central government. To the US frustration, Washington’s key battleground allies who enjoyed the White House backing since 2015 in a strategic alliance are now turning head to President Bashar al-Assad’s government.

According to reports, on July 27, a Syrian Kurdish delegation, dubbed the Syrian Democratic Council, the political branch of the so-called Syrian Democratic Forces (SDF) traveled to Damascus for talks with the central government. Controlling parts of northern Syria, the Kurdish-Arab delegation, led by SDC’s co-chair Illham Ahmad, reportedly sought a deal to end the fighting and return the rule of the Kurdish-controlled areas to the Syrian government. Further reports suggested that a government negotiating group had visited the north in mid-July and held talks with the leaders of the Democrat Union Party (PYD) which were described as constructive.

Kurds positive response to the central government’s call for reconciliation and reunion has left Americans without military and political cards to play an effective role in Syria’s future. The analysts maintain that just because the US has thousands of troops on the Syrian soil and operates military bases in the north, like in Hasakah and Kobani, does not mean Washington has all it needs to turn the tide to its advantage. The SDF, largely made of the Kurdish militant groups of People’s Protection Units (YPG) and the Women’s Protection Units (YPJ), are poised to slip out of the US domination if they strike a deal with the government, a development meaning the Americans witness the end of their power to influence the course of equations.

But what is currently motivating the Syrian Kurds to negotiate with the central government in Damascus? Two issues carry the reply.

Certainly, the abusive approach of the US to the Kurds bears much about their resorting to an agreement with Damascus. American-Kurdish cooperation in Syria begun in late 2014, when Kurds showed firm resistance against the ISIS terrorist group’s push to seize Kobani city. Before that Washington was only  supporting the so-called Free Syrian Army (FSA) militants, that were actually non-compliant to the American strategy in the war-hit nation. Some of them, were even roundly against the American military deployment to the Syrian territories. The understanding forced Pentagon also to set up an alliance with the Syrian Kurds who showed strong battle potentials. The US-covered Kurds moved towards the western Euphrates raising a decision to connect the Afrin canton to Kobani to make a unified self-rule region. Covered by the US-led coalition’s air raids, the SDF took control of Raqqa, the self-proclaimed ISIS caliphate capital, on October 17, 2017.

But the victories were only temporarily sweet to the beguiled Kurds. They wrongly believed that the US accepted them as a strategic ally and would defend them under any circumstances. Some of the Kurdish leaders strongly believed that the Americans have a special plan for their future and so it was necessary to continue the partnership with them. However, despite their optimism, Washington showed its true colors when it left the Kurds alone in the confrontation of a large-scale Turkish military campaign in Afrin and other Kurdish-ruled areas in assistance with the Arab opposition militias.

Washington chose to be silent on Turkish offensive, Olive Branch, which saw the Kurds resisting 58 days before losing Afrin to Ankara and allies on March 18. The Kurds for a second time were stabbed in the back when the Turkish Foreign Minister Mevlut Cavusoglu and the American Secretary of State Mike Pompeo on June 5 agreed in Washington to eject the Kurdish militias from the significant Manbij town.

Thereafter, Kurds came to their senses, understanding that very likely if they continue to set their heart on the US help, Washington will force them to hand over to Ankara what remains under their control in the north. Under such a grave situation, they will have problems living in their home areas. As a result, the Kurds are now back on the track after four years of misplaced trust in the Americans. They now feel the fact that any accord with the government of President Bashar al-Assad is better than falling afresh victim to a new American compromise.

The developments over the past few months led the Kurds to the idea that the central government is the future power holder. The recent months’ army retaking of large tracts of territory from the militias backs this view. They now see it unavoidable to make a decision: either confront a stronger Syrian Arab Army which is now finding it easy to take the northern territories back, or enter an accord and hand over their regions to Damascus.

Moreover, they are aware that according to the international laws and also the domestic constitution, the central government holds the right to rule over the whole of the country. This can provide them with a shield against the future Turkish offensives and also the American betrayal. So, the best choice, they find, is dialogue and consensual agreement with the government, something can promise them a better place in a future Syria.