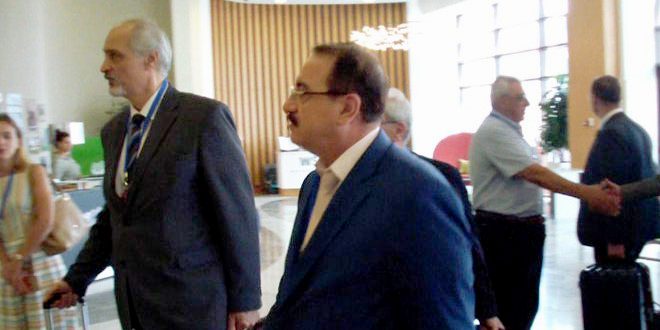 IRNA – The Syrian delegation to the tenth round of Astana format meeting headed by Dr. Bashar al-Jaafari held a meeting in Sochi on Monday with the Russian delegation headed by Russian President’s Special Envoy for Syria, Alexander Lavrentiev.

Earlier, the tenth round of Astana format meeting kicked off in the Russian city of Sochi with the participation of the Syrian Arab Republic delegation headed by Dr. Bashar al-Jaafari and the other delegations.

SANA’s delegate to Sochi said that a number of meetings are scheduled to be held between delegations of the guarantor states of Astana process namely (Russia, Iran and Turkey) and the participating delegations.

In addition to the delegations of the three guarantor states of Astana process, a UN delegation and a delegation of the “opposition” will participate in the meeting.

The Kazakh capital of Astana has previously hosted nine meetings on Syria, the last of which was on May 14-15 .

The guarantor states, at the end of Astana 9, emphasized commitment to Syria’s sovereignty, independence and territorial integrity and continuing the war against terrorist organizations until defeating them.