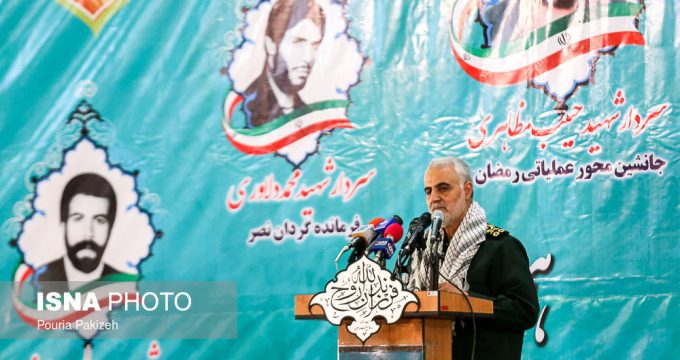 Iranian social media activists have launched a Twitter and Instagram hashtag calling on American Secretary of State Mike Pompeo to stop interfering in the internal affairs of Iran.

President Donald Trump is warning Iranian President Hassan Rouhani that he will face dire consequences for threatening the United States.

Iran inaugurated the production line of Fakoor air-to-air missiles with the presence of Defense Minister Brigadier-General Amir Hatami on Monday.

Iranian Leader Ayatollah Seyyed Ali Khamenei said in a meeting on Sunday that neither Judaizing Palestine nor the Deal of the Century will come true.

We’ve been around for millennia, BE CAUTIOUS! Zarif warns Trump

Iranian Foreign Minister Mohammad Javad Zarif warns US President Donald Trump to be cautious after he threatened the Islamic Republic with incredible hardships in a Tweet.

The Iranian defense ministry manufactured the country’s first drive-through X-ray system to scan the loads in trucks and cargos.

US President Donald Trump claims Washington is ready to make a “real deal” with Iran over the country’s nuclear program, a significant retreat from his blustery rhetoric just days after he threatened the Islamic Republic with incredible hardships.

ICJ calls US for halt of any new move against Iran

The President of International Court of Justice has sent a letter to the US Secretary of State Mike Pompeo calling on the US to avoid taking any further actions regarding anti-Iran sanctions.

The new technology of Iran in the field of secure quantum communications was unveiled on Wednesday in Iranian National Laser Center (INLC).

Commander of the Islamic Revolution Guards Corps (IRGC) Quds Force Major General Qassem Soleimani shrugged off US President Donald Trump’s recent threats against Iran, saying if the US were to begin a war, it would be Iran that would finish it.

The International Court of Justice said it will hold hearings next month to hear a lawsuit brought by Iran against the US for breaching the 1955 Treaty of Amity by re-imposing sanctions.

The drones team of the Air Force of the Army of the Islamic Republic of Iran left Iran for Kazakhstan to attend the International Army Games 2018.

ELECOMP 2018 kicks off in Tehran

The 24th edition of Iran International Electronic, Computer and E-Commerce Exhibition, known as ELECOMP, has kicked off in Tehran International Permanent Fairground, with companies from over 20 countries in attendance.

Omani Foreign Minister Yusuf bin Alawi bin Abdullah’s trip to Washington and his meeting with US Secretary of Defense James N. Mattis aimed at reducing tensions between Iran and the US, Al Arab Newspaper reported.

Abdolnasser Hemmati has been appointed by Rouhani’s cabinet as the new governor of Central Bank of Iran, replacing Valiollah Seif.

Iranian Parliament Speaker Ali Larijani warned of the US administration’s plots to increase pressures against the Islamic Republic in various economic fields, oil exports and banking transactions in particular.

Renault likely to leave Iran because of US sanctions

Renault SA is shaping up to be the latest European company to fall victim to US President Donald Trump’s renewed sanctions on Iran, as the automaker has raised the possibility of pulling out of Iran for fear of US sanctions.

According to Iranian Customs statistics of foreign trade, during the first quarter of current Iranian year more than 56 tones of any kinds of saffron worth $77.401 million were exported abroad.

Iran to file complaint against US for carpet-related sanctions

US decision to put carpet on sanctions list is against international protocols and Iran will lodge a lawsuit against US in international bodies, said Fereshteh Dastpak, head of Iran National Carpet Center.

The possible withdrawal of Iranian troops 100 kilometers (60 miles) from the Israeli border was discussed among other issues during the visit of Russian Foreign Minister Sergey Lavrov to Israel, Kremlin aide Yury Ushakov said.

Leaders of BRICS group of countries renewed their commitment to the political settlement in Syria through a comprehensive political process led by the Syrians in a way that guarantees Syria sovereignty, territorial integrity and according to international.

Yemeni army soldiers, backed by allied fighters from Popular Committees, have reportedly launched an airstrike against a strategic economic target in the United Arab Emirates in retaliation for Riyadh’s devastating military aggression against their impoverished homeland.

An alliance of Kurdish and Arab militants in Syria says it has come to an agreement with the Syrian government to develop negotiations to end violence in Syria.

US judge orders return of ancient limestone relief to Iran

A New York Supreme Court judge on Monday ordered a Persian bas-relief dating to approximately 500 B.C. to be returned to Iran, the country from which authorities say it was stolen more than 80 years ago.

Brighton & Hove Albion Football Club, which currently competes in the Premier League, has completed the signing of Iranian professional winger and attacking midfielder Alireza Jahanbakhsh for a “club record fee” from Dutch side AZ Alkmaar.

Iranians observed the longest total lunar eclipse known as ‘blood moon’ in Tehran, Isfahan and other big cities across the country on Friday night until Saturday morning.

Mohammad Javad Azari Jahromi, Iran’s Minister of Information and Communications Technology, said a new bill on copyright would be soon presented to the Iranian parliament.

The Iran men’s national under-20 volleyball team defeated South Korea at the final showdown of the 2018 Asian Men’s U20 Volleyball Championship on Saturday.