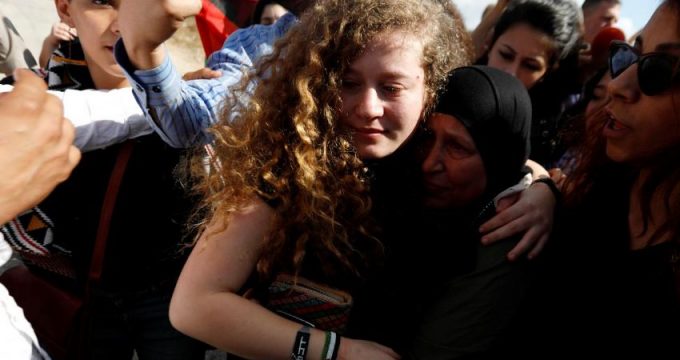 Alwaght – Palestinian teenager, Ahed Tamimi, was welcomed by relatives and supporters on Sunday after she was released from Israeli regime’s prison after completing a sentence for slapping an Israeli soldier.

The resistance icon called for Palestinians to continue their struggle against the Israeli regime’s occupation.

Tamimi, 17, was arrested last December after a video went viral showing her slapping and shoving two Israeli soldiers during a raid on the West Bank village of Nabi Saleh, northwest of the city of Ramallah.

Tamimi, who was 16 at the time of her detention, faced 12 charges, including aggravated assault. In March, she pleaded guilty to a reduced charge sheet that included assault and was sentenced to eight months’ imprisonment, dating back to her arrest in December.

“From this martyr’s house, I say: resistance is continuing until the occupation is removed,” she told reporters. “All the female prisoners in jail are strong, and I thank everyone who stood by me while I was in prison.”

Tamimi has been hailed as a heroine by many Palestinians for bravely standing up to the Israeli military aggression and recognized as a symbol of the Palestinian resistance against the Israeli occupation.

“Legal proceedings are not intended to solve the Israeli-Palestinian conflict, and instead of sending minors to prison for resisting the occupation, the time has come for a courageous leadership to free us all from the chains of the occupation.”

According to latest figures provided by the Palestinian prisoners’ rights group Addameer, some 5,900 Palestinians are currently being held in Israeli jails, many of them in administrative detention.

The detention is a form of imprisonment without charge or trial that allows the regime to incarcerate Palestinians for up to six months – and subject to indefinite extensions.