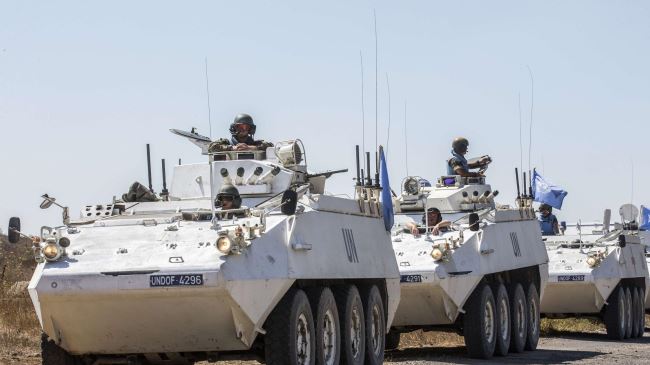 Press TV – Foreign-sponsored Takfiri militants have handed over a considerable amount of their medium and heavy munitions to government forces in Syria’s strategic southwestern province of Quneitra as army troops continue to make territorial gains and inflict stinging blows on the extremists.

Meanwhile, an unnamed Syrian military source has told the Arabic service of Russia’s Sputnik news agency that government forces are dispatching military equipment and personnel to the borders of the country’s militant-controlled northwestern province of Idlib, and are preparing for a large-scale operation to clear the area of terrorists.

“Military units are being deployed north of Hama province. The next stage will be to launch an offensive on the position of the so-called Jaysh al-Izza (the Army of Glory) terrorists in the villages of Kafr Zita, al-Lataminah, Latmin, Zakat Arbaen, al-Lahaya and Maarkabah,” the source said.

The source added, “The army is receiving information that militants in the northern part of the country are preparing to launch a broad offensive on the positions of the Syrian army. All necessary measures have been taken to strengthen our positions, which will enable the army to thwart possible assaults.”

A great proportion of Idlib province is currently under the control of foreign-backed Takfiri militant groups.

On May 21, the General Command of the Syrian Army and Armed Forces announced in a statement that complete security was restored to Damascus and its countryside after al-Hajar al-Aswad district and al-Yarmouk camp were totally purged of Daesh terrorists.