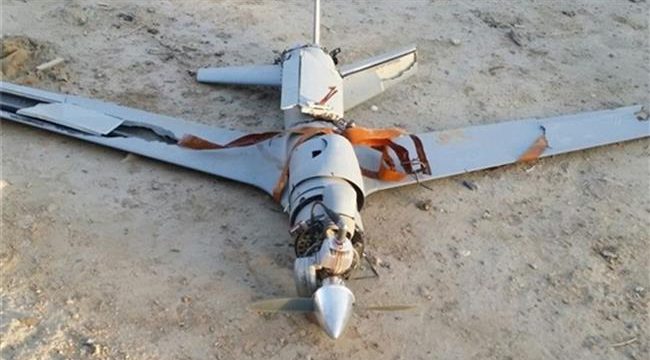 Press TV – Yemeni air defense units have shot down a Saudi-led reconnaissance drone in flight over a border area in the kingdom’s southern province of Asir.

Yemen’s Arabic-language al-Masirah satellite television network, citing an unnamed military source, reported that the drone was shot down over the province’s al-Rabou’a region on Friday.

On Monday, Yemeni forces, backed by allied fighters from Popular Committees, also managed to shoot down a similar Saudi spy drone in the Rashaha region of the kingdom’s southern province of Najran, the al-Masirah report added.

Some 20 spy drones have been shot down since the Saudi war on the impoverished country began over three years ago.

Saudi Arabia and some 20 of its allies, including the United Arab Emirates, Morocco and Sudan, launched a brutal war, code-named Operation Decisive Storm, against Yemen in March 2015 in an attempt to reinstall Abd Rabbuh Mansur Hadi, Yemen’s former president and a staunch ally of Riyadh, and crush the popular Houthi Ansarullah movement.

The movement, which is a significant aid to the Yemeni army in defending the country against the invading forces, has been running state affairs in the absence of an effective administration during the past three years.

The imposed war initially consisted of a bombing campaign but was later coupled with a naval blockade and the deployment of ground forces into Yemen.

The Yemeni Ministry of Human Rights announced in a statement on March 25 that the war had already left 600,000 civilians dead. The war and the accompanying blockade have also caused famine across Yemen.

The Saudi-led aggression has also taken a heavy toll on the country’s infrastructure, destroying many hospitals, schools, and factories. The United Nations has already said that a record 22.2 million Yemenis are in dire need of food, including 8.4 million threatened by severe hunger.

Several Western countries, the United States and Britain in particular, are also accused of being complicit in the ongoing aggression as they supply the Riyadh regime with advanced weapons and military equipment as well as logistical and intelligence assistance.