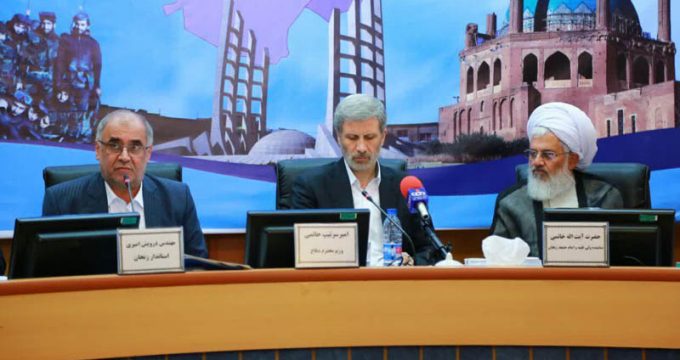 Iran will by no means bow to enemies’ demands: Defense minister

Hatami said on Saturday that enemies wrongly believe that they can force the Iranian nation and the Islamic establishment to yield to their demands through pressure.

The Iranians have managed to overcome “more difficult and complicated” conditions since the victory of the Islamic Revolution in 1979, including the Iraqi imposed war, acts of terror by the notorious anti-Iran terrorist group, the Mujahedin Khalq Organization (MKO), and extensive sanctions, he added.

“These threats and sanctions have no impact on the Iranian nation’s morale and willpower,” Iran’s military chief emphasized.

He said the Islamic Republic is currently facing “special conditions” created by the enemies and added that despite all threats against Iran, “We have many opportunities ahead to strengthen the [country’s] economic structure.”

Hatami pointed to the US withdrawal from the historic Iran nuclear agreement, officially known as the Joint Comprehensive Plan of Action (JCPOA), and said the world witnessed that the enemy “blatantly abandoned all its legal and international commitments” stipulated in the deal.

Elsewhere in his speech, Hatami called on the Iranian people and authorities to be fully prepared to counter the country’s “sworn enemy” and said Iran would continue its path through resistance.

He expressed confidence that despite all difficulties, Iran would turn all the enemies’ plots into appropriate grounds for development.

Earlier on Saturday, a senior commander of the Islamic Revolution Guards Corps (IRGC) warned any country that seeks to endanger Iran’s interests, particularly the United States, saying Tehran will retaliate in kind in such a case.

“If some seek to endanger the Islamic Republic of Iran’s interests, Iran will also endanger their interests with its capabilities,” IRGC’s Deputy Commander for Political Affairs Brigadier General Yadollah Javani said.

Javani’s remarks came a few days after Chief of Staff of the Iranian Armed Forces Major General Mohammad Baqeri said the country’s Armed Forces are highly prepared to give a “crushing response to any threat at any level” against the Islamic Republic.

“The false assumptions that the US president has about the astonishing capabilities of the brave Iranian nation and the Armed Forces will never come true,” Baqeri said in a statement on Tuesday.