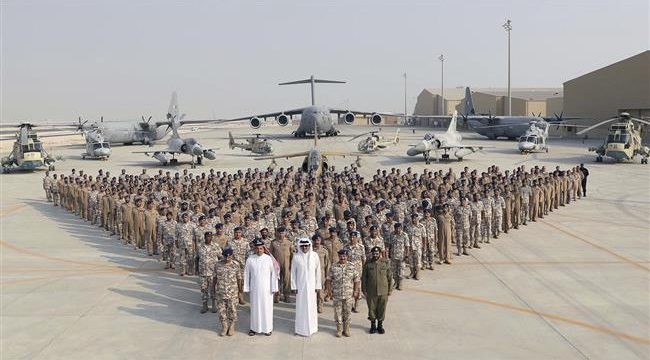 US expanding biggest Mideast military base in Qatar

Press TV – Qatar and the United States have launched a project to expand Washington’s already largest military base in the Middle East region, with both sides discussing “permanent” American presence in the emirate.

The two sides “laid the foundation stone for expanding” the al-Udeid air base, located 35 kilometers southwest of the capital Doha on Tuesday, the official Qatar News Agency (QNA) reported.

The project includes “the construction of barracks and service buildings to support joint security efforts, as well as improving the quality of life of the troops stationed at the airbase,” it said.

The QNA said the expansion project “underscores Qatar’s commitment to deepening its strategic military relations with the United States.”

“The State of Qatar, along with its strategic US ally, is working on drawing up a roadmap for the future of bilateral relations, including the addition of al-Udeid Air Base to the list of US permanent military bases,” it said.

Addressing a press conference that followed the launch of the project, American Chargé d’Affaires Ryan Gliha called Qatar an “indispensable partner for the United States.”

“We saw today the opening of a new construction project… what we hope to see in the coming years and months is [the] strengthening” of the bilateral ties, he said. “Billions of dollars have been spent already at al-Udeid over the last 15 years to support our operations… These are essential to the fight against Daesh and our ability to lead the coalition.”

He was referring to the aerial military campaign against what is claimed to be Daesh targets in Iraq and Syria by a US-led coalition comprising scores of Washington’s allies.

The facility houses some 10,000 US forces, as well as warplanes, equipment, and ammunition. It also provides services to other coalition members.

The expansion project went underway amid a bitter diplomatic crisis between Qatar and a Saudi Arabia-led quartet of countries.

The foursome cut their diplomatic ties with Qatar and placed it under a trade embargo last June, accusing it of “supporting terrorism.” Doha roundly rejects the accusation.

US President Donald Trump initially backed the Saudi-led bloc, but later advised that the crisis be resolved.

According to various reports, the about-face came after Trump’s aides, who were wary about the future of the US military involvement in Qatar, convinced him to approach the issue more moderately.

The diplomatic dispute has triggered an arms rivalry between Qatar and the boycotters — Saudi Arabia, the United Arab Emirates, Bahrain and Egypt — with the US taking advantage of the situation to sell more military equipment under lucrative deals with the feuding parties.