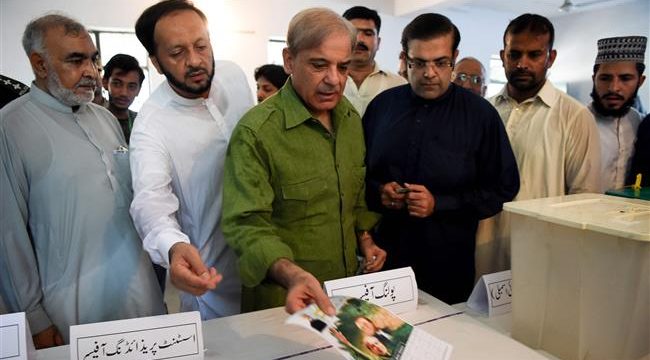 Press TV – A bloody bombing attack has cast dark shadows over Pakistan’s long-awaited election day, despite the deployment of hundreds of thousands of troops to secure a consequential vote that would lead to a rare democratic transition of power in the country’s 71-year history.

A huge explosion tore through a polling station in the southwestern city of Quetta just hours after polls opened. As many as 30 are confirmed dead and dozens more have been wounded.

The final outcome is expected to be announced within 24 hours after the polling, but preliminary results will be out late at night.

A supporter of Imran Khan, chairman of the Pakistan Tehreek-e-Insaf party, wears a mask during a campaign rally in Karachi, on July 22, 2018. (Photo by Reuters)

A tight race has been underway between the party of jailed-ousted prime minister Nawaz Sharif — the Pakistan Muslim League-Nawaz (PML-N), and that of former star cricketer Imran Khan — Pakistan Tehreek-e-Insaf (PTI).

The latest polls suggest that the former cricket hero is leading the race to become Pakistan’s next prime minister.

“Let’s test Imran as we have been testing others for the last several decades,” said a 22-year-old voter, who cast his ballot for Khan’s party in the city of Lahore in Punjab.

Supporters of Shahbaz Sharif, the younger brother of former prime minister Nawaz Sharif attend a campaign meeting ahead of the general elections in Rawalpindi on July 23, 2018. (AFP)

Sharif, 68, who was imprisoned on corruption-related charges earlier this month, will be watching this election from behind bars. He was removed from office by the Supreme Court last year.

He returned from London earlier this month, along with his daughter Maryam. Both, however, were taken into custody. Sharif faces 10 years in jail and his daughter will be imprisoned for seven years.

In the event of PML-N’s victory, Shrif’s brother and former Punjab Chief Minister, Shahbaz would be the next prime minister.

The vote, however, has been dubbed the “dirtiest election” due to allegations of widespread pre-poll rigging by the armed forces, with Khan believed to be the beneficiary.

A judge in the High Court of Islamabad appeared to back up the allegations on Sunday, claiming that the military Inter-Services Intelligence (ISI) had been interfering in the judiciary.

The powerful military, whose ruling fell out in 2007 by the outgoing party of Sharif, however, denies any involvement.

Pakistani soldiers patrol in the port city of Karachi on July 24, 2018. (AFP)

But the independent Human Rights Commission of Pakistan (HRCP) has said there are “ample grounds to doubt” the legitimacy of the elections and criticized “blatant, aggressive and unabashed attempts to manipulate the outcome.”

The run-up to the elections has seen a massive crackdown on the media with many journalists saying they have suffered intimidation for their reporting.

The final weeks of the campaign season were marred by a string of bloody militant attacks that left more than 180 people dead — three of them candidates.

Up to 800,000 police and military forces have been stationed across the country to secure tens of thousands of polling stations.