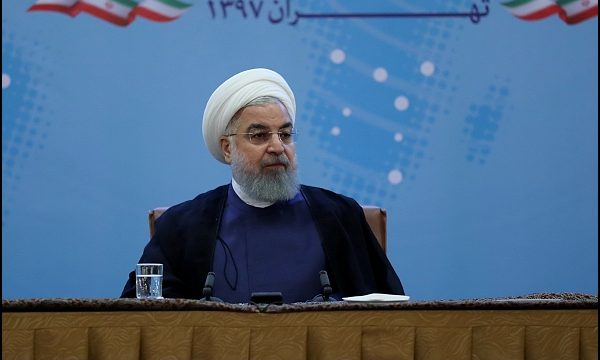 Rouhani: US baseless threats not worthy of response

Iranian President Hassan Rouhani said that empty and baseless threats uttered by some American rulers are not worthy of response, adding, “we must respond to them in action.”

US President Donald Trump claims Washington is ready to make a “real deal” with Iran over the country’s nuclear program, a significant retreat from his blustery rhetoric just days after he threatened the Islamic Republic with incredible hardships.

Iran can block global oil exports whenever it wants: IRGC

IRGC Chief-Commander Major General Mohammad Ali Jafari has warned the US of the consequences of its efforts to cut Iran’s oil exports, saying that all oil transportation passageways are within Iran’s reach.

Government spokesman Mohammad Bagher Nobakht said on Wednesday that he has resigned from all his responsibilities in the Iranian government.

Abdolnasser Hemmati has been appointed by Rouhani’s cabinet as the new governor of Central Bank of Iran, replacing Valiollah Seif.

Turkey has no replacement for oil, gas imports from Iran

Turkey’s foreign minister says his country disagrees with US anti-Iran sanctions and does not have to implement them.

ICJ calls US for halt of any new move against Iran

The President of International Court of Justice has sent a letter to the US Secretary of State Mike Pompeo calling on the US to avoid taking any further actions regarding anti-Iran sanctions.

“US must abandon idea of holding one-sided negotiation with Iran”

Iran’s Foreign Ministry Spokesman Bahram Qassemi has advised US government officials and President Donald Trump to forget about holding one-way negotiations with Iran under the shadow of threat.

Commander of the Islamic Revolution Guards Corps (IRGC) Aerospace Force Brigadier General Amir Ali Hajizadeh announced that the IRGC’s fighter jets will be equipped with cruise missiles with a range of 1500 kilometers.

India has taken note of US sanctions on Iran: Oil Minister Dharmendra Pradhan

India has taken note of the US reimposing economic sanctions on Iran, the nation’s second-biggest supplier of crude oil, oil minister Dharmendra Pradhan said on Wednesday. “Indian refineries import crude oil from diverse sources, including Iran, depending on technical and commercial considerations,” Pradhan said in a written reply in the Rajya Sabha.