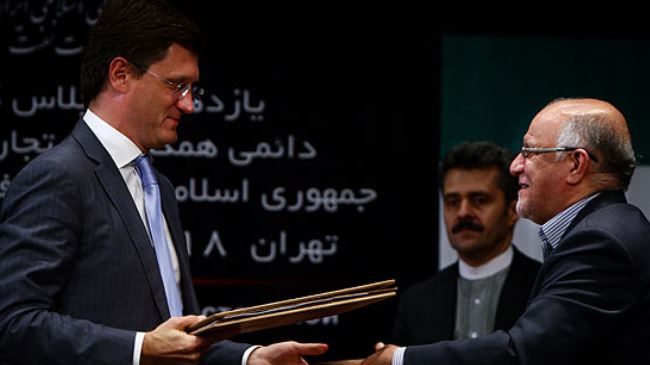 Press TV – Russia and Iran have discussed energy cooperation between the two countries and through OPEC as part of their efforts to blunt the impact of Western sanctions.

President Vladimir Putin has said Russia is prepared to continue its oil investment in Iran at the level of $50 billion in the face of US plans to reimpose sanctions on the Iranian oil and gas sector on November 4.

A $4 billion deal signed by a major Russian oil company “will be implemented soon” in Iran, Ali Akbar Velayati, a top adviser to Leader of the Islamic Revolution Ayatollah Seyyed Ali Khamenei, said this month after visiting Moscow.

The Iranian official said two other major Russian oil companies, Rosneft and Gazprom, had started talks with Iran’s Ministry of Petroleum to sign contracts worth up to $10 billion.

Iran and Russia have yet to implement an oil-for-goods scheme originally signed in 2014 and extended for five more years in April, which calls for Iranian crude exports of up to 500,000 barrels per day in return for Russian goods.

The scheme includes Iran’s use of Russian machinery, equipment and installations Iran needs in its strategic petroleum, mining, construction and transportation sectors.

A tentative arrangement calls for swapping around 300,000 barrels per day of Iranian crude oil via the Caspian Sea and the rest from the Persian Gulf.

As many as 12 projects in Iran’s petroleum sector have been presented to Russia’s Gazprom, Rosneft, Gazprom Neft, Zarubezhneft, Taftneft and Lukoil for development.

Novak has said Russian companies are open to partnership with other foreign entities for work in Iran – something which Iranian officials have been encouraging as a way to guard against sanctions.

In March, India’s ONGC Videsh Ltd (OVL) signed a cooperation agreement similar to the one Zarubezhneft inked with Iran’s IDRO Oil a month before to jointly bid for the development of Susangerd oilfield in southwest Iran.

Zarubezhneft has already signed a $742 million deal with Iran’s Dana Energy to boost production at Aban and Paydar fields in Ilam province near the Iraqi border.

Iran and Russia have a common reason to seek each other. Russian oil firms are under sanctions from the West over the Ukraine crisis while the specter of unilateral US sanctions has been driving international firms away from Iran.

Nevertheless, the two sides have a bumpy road ahead because they are natural rivals. Iran and Russia are interchangeably own the world’s biggest gas reserves beside being major oil producers.

“The fact is that even after the implementation of the JCPOA and at the height of the strategic and political cooperation between Iran and Russia, economic and trade cooperation with the country in order to deepen strategic relations was at the minimal level,” Tehran-based Sharq daily wrote.

“This was partly due to the fact that in principle there is no advantage in establishing and strengthening economic and trade relations between Iran and Russia in comparison with Europe and Asia, and partly because the two sides basically do not believe in the establishment and sustainability of such relations.”

According to the paper, for Russian companies the priority now is to work with American and European companies.

However, proponents of closer ties believe that geostrategic conditions have changed for both countries and that a new era of cooperation might be feasible for Russia and Iran despite having a history of mistrust.