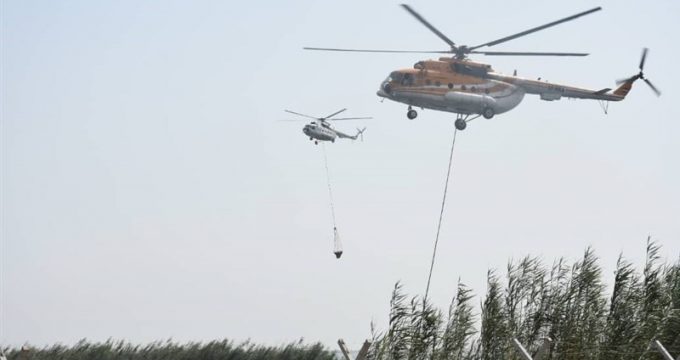 IRNA – A thick layer of smoke resulted from a blaze in the Iraqi part of Hoor Al-Azim lagoon crippled everyday activities in three cities southwestern Iran, a local senior official said on Monday.

The fire broke out some 17 days ago in western parts of the lagoon straddling Iran and Iraq.
On Friday, Iran began helping its western neighbor fight the big fire which was caused by high temperature and conditions resulted from drying up of the lagoon.
Iran’s firefighting operations are taking place based on some recent coordination made between Iranian and Iraqi officials.

Routine activities were halted in three districts of Iran’s Khuzestan Province including cities of Hoveyzeh, Hamidiyeh and Sousangerd. Local emergency departments are being put on alert.

Offices in Hoveyzeh which is located near the border with Iraq, are closed due to huge clouds of smoke, Nazem Sobouti, governor of the district told Islamic Republic News Agency (IRNA).

Local fire crew is still battling with the blaze, though the flames in some parts have been extinguished, said Ahmad-Reza Lahijanzadeh, head of environment department in Khuzestan Province on Sunday.

Iran is using helicopters for tackling the huge fire, he said.

The governor’ offices of other two districts, Hamidiyeh and Sousangerd, said in separate statements that all public activities, except those for medical services, were halted on Monday due to the thick clouds of smoke.

Local Red Crescent crew has been put on alert due to the situation, according to the statements.

The fire-prone area of the Iraqi part of Hoor Al-Azim covers an area of 150,000 hectares. More than 16,000 hectares of entire area have been burning over the past two weeks.

The lagoon has also been an origin of sand and dust storms since being dried up due to the low level of rivers’ water.