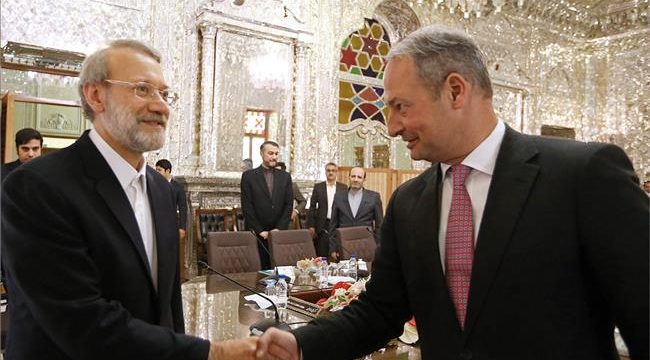 Press TV – The speaker of Iran’s Parliament says European countries must offer their plans for the full implementation of a nuclear agreement signed between Iran and the P5+1 group of countries following withdrawal of the United States from the deal.

Ali Larijani made the remarks in a meeting with Andreas Schieder, the managing parliamentary leader of the Social Democratic Party in Austria’s National Council, in Tehran on Sunday.

Larijani emphasized that European countries must endeavor to implement the nuclear agreement, officially known as the Joint Comprehensive Plan of Action (JCPOA), in the best possible manner.

“Europe must present its approach and plans for the full implementation of the JCPOA,” the top Iranian parliamentarian pointed out.

Since the US president pulled Washington out of the nuclear deal, European countries have been scrambling to ensure that Iran gets enough economic benefits to persuade it to stay in the deal. The remaining parties have vowed to stay in the accord.

Leader of the Islamic Revolution Ayatollah Seyyed Ali Khamenei said on July 15 that the European signatories to the nuclear deal must provide Tehran with necessary guarantees about the continued implementation of the deal.

“Of course the European sides [to the JCPOA] are obligated to provide necessary guarantees with regard to the JCPOA, but the country’s economy must not be tied to this issue,” the Leader stated in a meeting with Iranian President Hassan Rouhani and his cabinet in Tehran.

Elsewhere in the meeting, Larijani said Iran has a positive view on interaction with Austria, because it was among those countries, which moved to develop cooperation with the Islamic Republic after the signing of the JCPOA in 2015.

He stressed the importance of improving parliamentary relations between the two countries, which would lead to enhanced cooperation in economic, political and cultural sectors.

For his part, the Austrian official said his country, as a member state of the European Union, supports the nuclear accord reached between Iran and the five permanent members of the UN Security Council – the United States, Britain, France, China and Russia – plus Germany.

He added that Austrian authorities do not believe that the continuation of the JCPOA depends on the US and they would make efforts to completely implement the deal.

During a joint press conference with the Austrian chancellor, the Iranian president slammed as illegal the US withdrawal from the 2015 nuclear agreement, saying Washington’s move benefits no one.

“Both of us agree that we should try to keep this agreement. We see eye to eye that the US move [to withdraw from the deal] is illegal, against international obligations and to the detriment of the US and all countries,” Rouhani said.