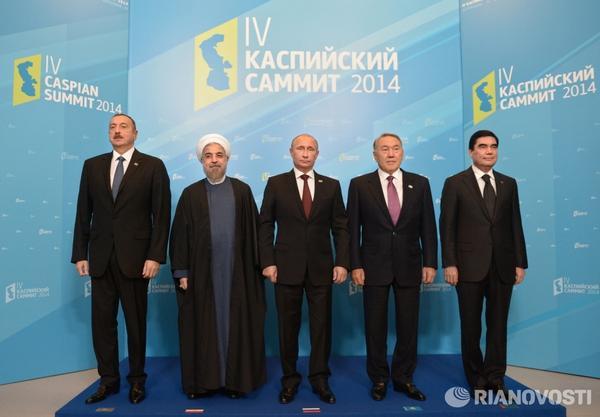 Bourse and Bazaar | Stanislav Pritchin: Negotiations on the international legal status of the Caspian Sea, which started in 1996, appear to have at last reached the finish line. After 22 years, the five countries around the sea have come close to signing a convention on its legal status. If they do, it seems that the agreement will allow to pave the way for the construction of the underwater the Trans-Caspian Gas Pipeline and other projects and will also close the access to the sea for the armed force of third countries.

Russia has completed its part of the work on the preparation of the convention. According to its official legal information website, the government in the end of July approved in the draft submitted by the Foreign Ministry after coordination with Azerbaijan, Iran, Kazakhstan and Turkmenistan. It is expected that the document will be signed at the summit of their heads of state on 12 August in Aktau, Kazakhstan.

Over the long negotiating process, the Caspian Five have held 51 meetings of a special working group at the level of deputy foreign ministers (the main negotiating platform established in 1996), about 10 meetings of foreign ministers and four presidential summits (in 2002 in Ashgabat, in 2007 in Tehran, in 2010 in Baku and in Astrakhan in 2014). In the last years the negotiators agreed on 90 percent of the draft convention. The delay in the agreement on the last 10 percent was because the most controversial issues remained to be solved. Two of the most acute have been the principle used for the division of the Caspian Sea and the mechanisms of approval of underwater pipeline and cable projects.

Iran has had a special position on the first issue. Insisting on Soviet-era agreements, it has not recognized the agreements between Russia, Azerbaijan and Kazakhstan on the division of the northern part of the Caspian Sea signed in 2003. These three countries used for delimitation the middle modified line (equidistant from the coast line and taking into account the length of the coastline). The Iranian position was instead to divide the sea into equal sectors of 20 per cent, since using the middle modified line would leave it with the smallest sector of about 11 per cent.

In response to such a difficult challenge, the draft of the convention does not include precise wording with geographical coordinates of the boundaries of sectors, but rather only the principles for the division of the sea. This allows for the transfer of responsibility for the division from the five-sided discussion to the two – and three-way level, as was the case when the northern part of the sea was divided.

Judging by the dynamics of recent contacts between Iran and Azerbaijan, bilateral negotiations on the division of the southern part of the sea are in full swing. This positive trend in relations between the two may have been one of the reasons for progress in the five-sided Caspian dialogue.

The second cornerstone for the negotiation process was the possibility of building trans-Caspian projects. Originally Russia and Iran emphasized the environmental danger of such projects and stressed the need for coordination by all five countries. Turkmenistan defended its right to build the Trans-Caspian Gas Pipeline without any consultations with its neighbours. In response to this challenge, the draft of the convention indicates that all submarine cables or pipelines must meet the necessary environmental requirements and standards approved under inter-state agreements. However, all the countries around the Caspian Sea would have the right to lay any pipelines and cables without the consent of their neighbours, but with the necessary notification about the routes taken. This means that, theoretically, after signing and ratifying the convention, Turkmenistan will be able to start looking for partners for the construction of the Trans-Caspian Gas Pipeline.

There is still a possibility that one of the parties refuses to endorse the draft document in its current form at the last moment. But the approval of the draft by Russia’s government and the announcement of a date for the summit indicate that the meeting will take place and, most likely, will bring about the long-awaited convention.